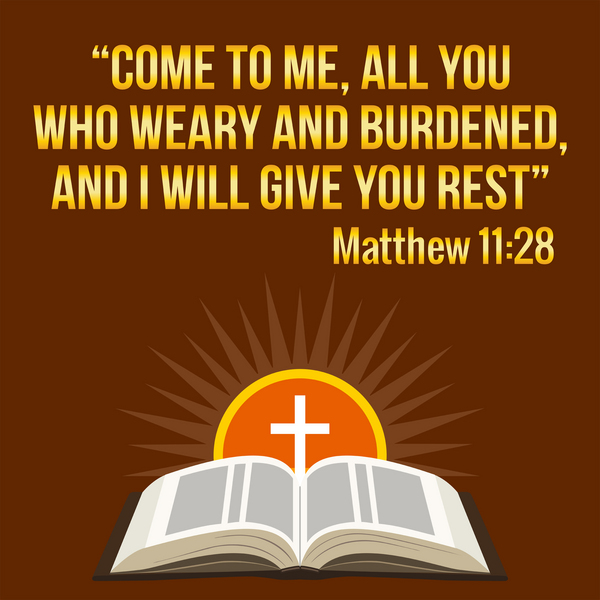 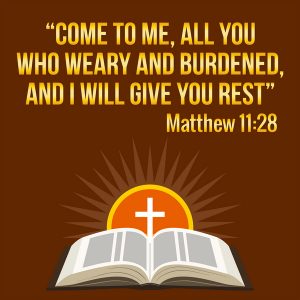 Last week, in my sermon “Like a Feather,” we discussed how Jesus’ yoke is easy and His burden is light.

How salvation itself is “easy.”

However, we had to stop there or my sermon would have gone on way too long. 🙂

I also noted that doubt’s yoke is hard and burden is heavy. A such, stopping at the point of salvation doesn’t remove the yoke or lift the burden completely, does it?

But you mess up…I mess up…we mess up so much. Avoiding sin seems anything but an easy yoke or light burden.

Have we lost our salvation?

Will we lose our salvation?

Were we every saved?

Doubt’s yoke is hard and burden is heavy.

You Are Not Alone

21 So I find it to be a law that when I want to do right, evil lies close at hand. 22 For I delight in the law of God, in my inner being, 23 but I see in my members another law waging war against the law of my mind and making me captive to the law of sin that dwells in my members. 24 Wretched man that I am! Who will deliver me from this body of death? 25 Thanks be to God through Jesus Christ our Lord! So then, I myself serve the law of God with my mind, but with my flesh I serve the law of sin.

Do those words speak to your battle with sin? [ Yes. “For I do not do what I want, but I do the very thing I hate.” ]

Is Paul going to be in heaven? [ Yes…or at least every indication is yes. ]

Of course he did…he was saved, not sinless. That’s why another apostle, John, confidently asserts that:

So, the first thing I want you to realize when you wonder how you, a believer in the Lord Jesus, can continue to sin…that…

You are not alone.

Now, that doesn’t make it okay…but you aren’t some diseased anomaly. You are part of the diseased norm.

As it is said, church is a hospital for sinners, not a museum for saints.

All Christians wrestle with sin. If they say otherwise, they deceive themselves and the truth is not in them.

You are not alone.

Great…we are not alone…that just means were are just all on the same spiritual Titanic, right? We’ve hit the iceberg together and will all drown in the cold, cruel waves of eternity for the damned. We don’t know for sure who wrote Hebrews, but let’s read some from there, starting with Hebrews 2:18:

For because he himself has suffered when tempted, he is able to help those who are being tempted.

And a couple chapters later,

14 Since then we have a great high priest who has passed through the heavens, Jesus, the Son of God, let us hold fast our confession. 15 For we do not have a high priest who is unable to sympathize with our weaknesses, but one who in every respect has been tempted as we are, yet without sin. 16 Let us then with confidence draw near to the throne of grace, that we may receive mercy and find grace to help in time of need (Hebrews 4:14-16).

Then He must truly hate those of us who do it all the time, right? Right?!

“For we do not have a high priest who is unable to sympathize with our weaknesses, but one who in every respect has been tempted as we are…”

And then what does the author of those words tell us to do?

“Let us with confidence draw near to the throne of grace, that we may receive mercy and find grace in time of need.”

Does Jesus truly hate those of us who sin all the time?

No. Jesus understands what you are going through and, when you blow it, wants you to draw near.

Ultimately…after our initial salvation…the burdensome doubts have to do with whether we can lose our salvation, right?

Is it “once saved, always saved”?

I’m going to tell you right now that I could preach a lengthy sermon for either side. Telling you “once saved, always saved” or warning you about shipwrecking you faith.

Which one is right?

I think it is just a matter of perspective. I choose the perspective that if you “fall away,” you were never saved. Others choose to view it as where you can be saved, unsaved, saved, and unsaved.

Ultimately, I would suggest that anyone who ends up in heaven was (for all intents and purposes) always saved, and anyone who isn’t never was.

And I wish I could tell you with 100% it is “once saved, always saved.” But lying is worse than doubting, and quite a few things are not made absolutely clear in the Bible.

No matter what a super-confident preacher might tell you.

22 At that time the Feast of Dedication took place at Jerusalem. It was winter, 23 and Jesus was walking in the temple, in the colonnade of Solomon. 24 So the Jews gathered around him and said to him, “How long will you keep us in suspense? If you are the Christ, tell us plainly.” 25 Jesus answered them, “I told you, and you do not believe. The works that I do in my Father’s name bear witness about me, 26 but you do not believe because you are not part of my flock. 27 My sheep hear my voice, and I know them, and they follow me. 28 I give them eternal life, and they will never perish, and no one will snatch them out of my hand. 29 My Father, who has given them to me,is greater than all, and no one is able to snatch them out ofthe Father’s hand. 30 I and the Father are one.”

Did you hear Jesus’ voice?

Then you are part of his flock!

If you are part of His flock, when will you perish?

But what happens if Satan fools you and steals you from Jesus’ flock?

Nobody. Nobody! Nobody can snatch you out of Jesus’…or the Father’s…hand!

Or as Paul writes:

38 For I am sure that neither death nor life, nor angels nor rulers, nor things present nor things to come, nor powers, 39 nor height nor depth, nor anything else in all creation, will be able to separate us from the love of God in Christ Jesus our Lord (Romans 8:38-39).

Nothing in creation can! Nobody. Not even you!!!

By the time I was done with “Just in Case,” I had shown the following…

Don’t fret over your salvation. It is not dependent on you. It is dependent only on the most dependable being.

The Most High won’t let you go.

What Is Your Alternative?

Now, I don’t know if, at this point, you feel the “Have I blown it?” yoke taken off your neck or the “Can I blow it?” burden lifted off your shoulders.

I called that 2010 sermon “Just In Case” after a Tesla song that includes these verses:

Just in case I don’t make it to heaven

Something so beautiful makes life worth living, yeah

Than you just in case I…

What if you aren’t going to make it to heaven? What if you knew right now that you were damned?

What would you change?

The truth would remain the truth, wouldn’t it?

Jesus would still be the one and only Savior, wouldn’t he?

Shows you aren’t…and won’t be damned.

What is the saying? If you think that you might be insane, you aren’t?

I suspect we could also say…

If you think you may be lost, you aren’t.

But once you are saved, I think if you recognize your sinfulness and it worries you…makes you repent…then you are probably saved and will remain so.

It’s when you think you don’t think you have an issue with sin it’s a problem. Think 1 John 1:8.

Oh, and I definitely would posit that if you think you committed the unforgivable sin.

I’ve veered off from Scripture into speculation…so let’s veer back. No, I cannot assure you 100% it is “once saved, always saved.” But I can assure you that these verses are 100% true:

35 Jesus said to them,”I am the bread of life; whoever comes to me shall not hunger, and whoever believes in me shall never thirst. 36 But I said to you that you have seen me and yet do not believe. 37 All that the Father gives me will come to me, and whoever comes to me I will never cast out. 38 For I have come down from heaven, not to do my own will but the will of him who sent me. 39 And this is the will of him who sent me,that I should lose nothing of all that he has given me, but raise it up on the last day. 40 For this is the will of my Father, that everyone who looks on the Son and believes in him should have eternal life, and I will raise him up on the last day” (John 6:35-40).

You are not alone…we all wrestle with sin.

Jesus understands what you are going through and wants you to draw near.

Jesus will never cast you out…or lose you.

You will see Him on the last day.