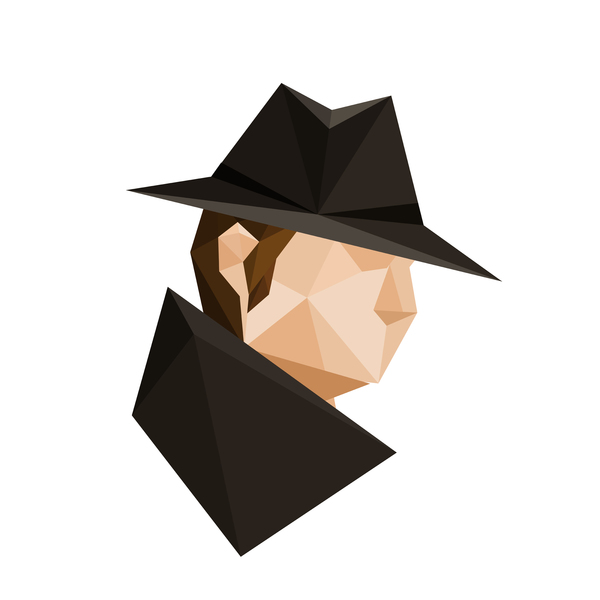 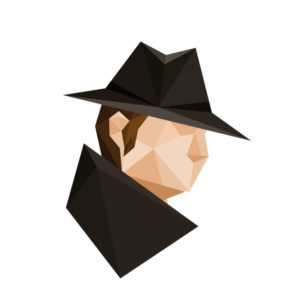 This is going to be a short sermon with one basic point…so let’s jump right into Scripture, specifically Numbers 13:1-3:

13 The LORD spoke to Moses, saying, 2 “Send men to spy out the land of Canaan, which I am giving to the people of Israel. From each tribe of their fathers you shall send a man, every one a chief among them.” 3 So Moses sent them from the wilderness of Paran, according to the command of the LORD, all of them men who were heads of the people of Israel.

And Moses did exactly as commanded, sending 12 spies to Canaan. Do you remember how that worked out? Just in case you don’t, let’s go a bit further in Numbers:

25 At the end of forty days they returned from spying out the land. 26 And they came to Moses and Aaron and to all the congregation of the people of Israel in the wilderness of Paran, at Kadesh. They brought back word to them and to all the congregation, and showed them the fruit of the land. 27 And they told him, “We came to the land to which you sent us. It flows with milk and honey, and this is its fruit. 28 However, the people who dwell in the land are strong, and the cities are fortified and very large. And besides, we saw the descendants of Anak there. 29 The Amalekites dwell in the land of the Negeb. The Hittites, the Jebusites, and the Amorites dwell in the hill country. And the Canaanites dwell by the sea, and along the Jordan.”

30 But Caleb quieted the people before Moses and said, “Let us go up at once and occupy it, for we are well able to overcome it.” 31 Then the men who had gone up with him said, “We are not able to go up against the people, for they are stronger than we are.” 32 So they brought to the people of Israel a bad report of the land that they had spied out, saying, “The land, through which we have gone to spy it out, is a land that devours its inhabitants, and all the people that we saw in it are of great height. 33 And there we saw the Nephilim (the sons of Anak, who come from the Nephilim), and we seemed to ourselves like grasshoppers, and so we seemed to them” (Numbers 13:25-33).

After that, how would you answer? END_OF_DOCUMENT_TOKEN_TO_BE_REPLACED 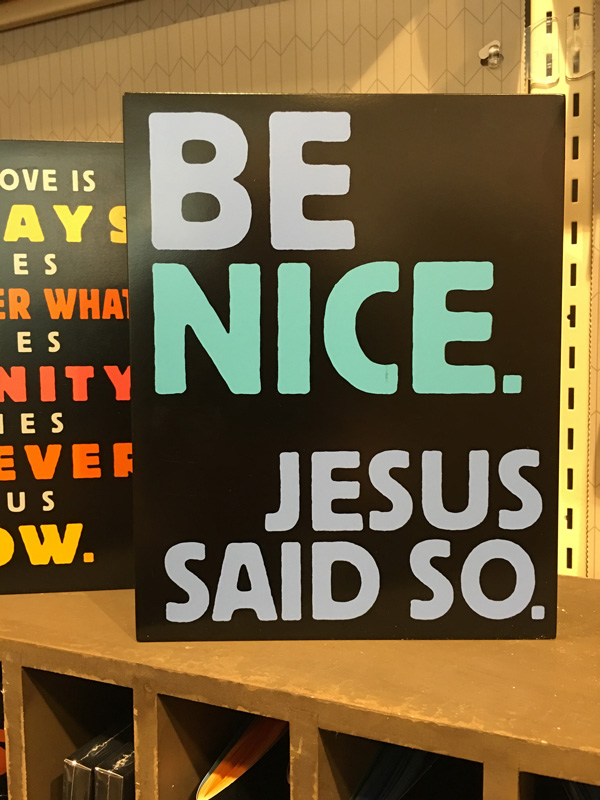 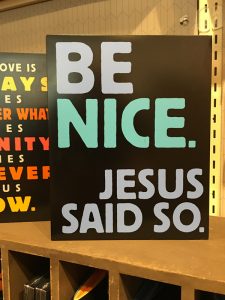 Augie and I were out getting mom birthday cards and gifts…and at the Hallmark Store I couldn’t help but purchase what is pictured here.

Now, Michelle liked it so much that instead of it ending up in my office, it’s in her hutch. 🙂

But, how biblically correct is it?

Well, I suppose it all depends on how you define “nice.” Searching for “Jesus ‘be nice'” on Google, the top three hits were:

Two vote down and one votes up, but says it is not enough…

My Mac’s dictionary’s first definition of nice is: END_OF_DOCUMENT_TOKEN_TO_BE_REPLACED 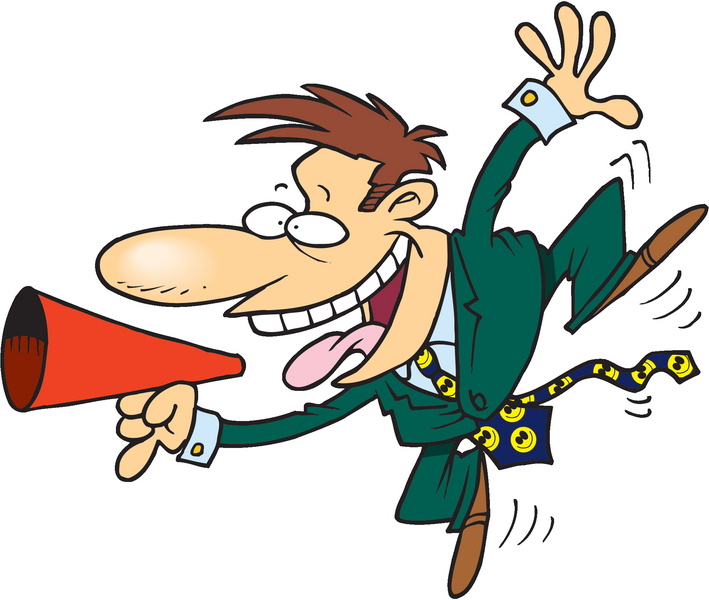 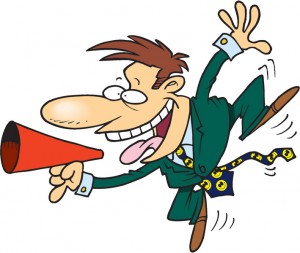 Now, if you are a Christian you already believed that, so it’s not so shocking, eh?

If you aren’t a Christian, you don’t believe it anyway.

In either case, don’t you feel the article’s title makes this post bait-and-switch? You were promised something amazing and got quite the opposite. You have every reason to be annoyed. 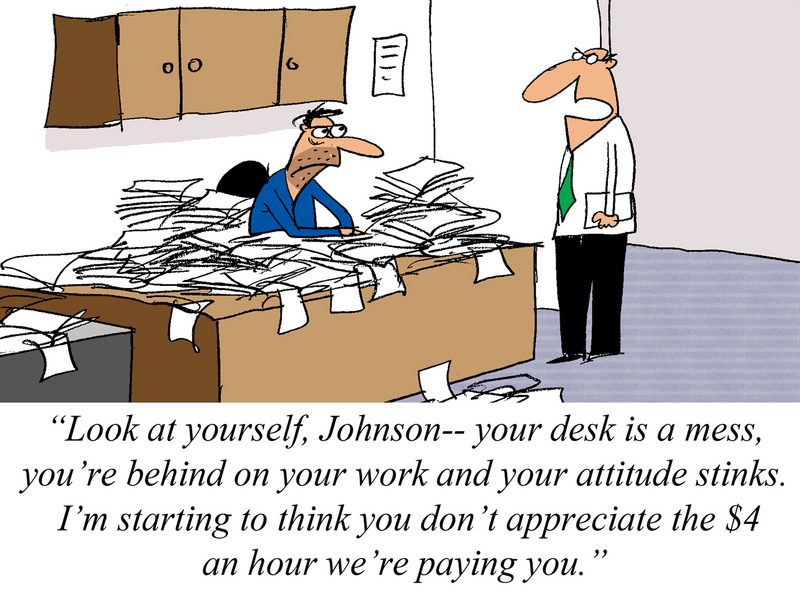 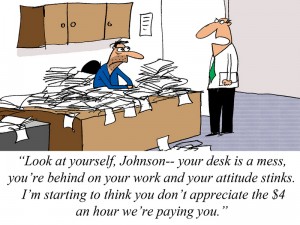 We are now most of the way through our “walk about” in Colossians. This is talk number nine of eleven in the series, “Dear Least Important Church…”

And after reading today’s section, Colossians 3:18-4:1, I thought to myself, “Finally Paul is getting practical.” Now, don’t get me wrong…I’m not suggesting that everything that preceded this section wasn’t useful. However, when I read these verses they seemed pretty simple “dos” and “don’ts”…without being wrapped in deep theological thoughts. Let’s see if you agree as we review them together. Please turn with me to Colossians 3:18 and we’ll read through the first verse of chapter 4: END_OF_DOCUMENT_TOKEN_TO_BE_REPLACED 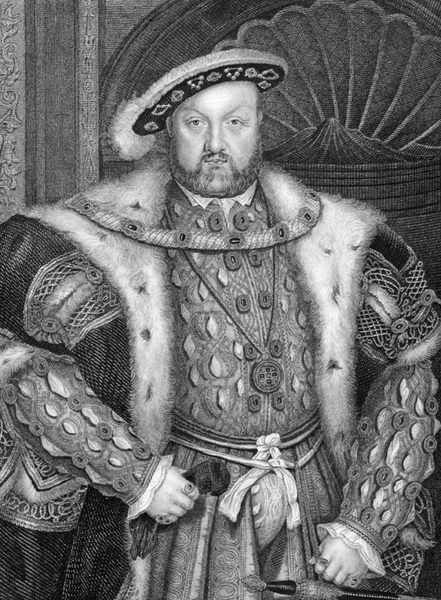 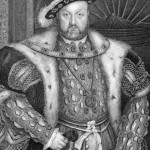 9 But you are a chosen race, a royal priesthood, a holy nation, a people for his own possession, that you may proclaim the excellencies of him who called you out of darkness into his marvelous light. 10 Once you were not a people, but now you are God’s people; once you had not received mercy, but now you have received mercy (1 Peter 2:9-10).

If you’ve been a Christian any length of time, it is likely that you have heard those words…and they may instill in you both a sense of honor and feeling of unworthiness. Caught up in the hustle-and-bustle of daily life…along with all its various trials and tribulations…they are easy words to lose track of but awesome ones to remember.

As we continue our “walk about” through Colossians with this eighth talk in the series “Dear Least Important Church…”…let’s remember those words from Peter as we hear these from Paul in today’s reading from Colossians 3:12-17:

END_OF_DOCUMENT_TOKEN_TO_BE_REPLACED

There is an article worthy of a read from Megan McArdle about "Why [She Tries] Not to Write Bad Reviews."

A key part of what she says:

But that’s not actually the main reason I avoid it. The main reason I avoid the joys of snarky takedowns is that it’s not very good for you. Snark is immense, immense fun; the only thing more enjoyable than chortling to yourself over a particularly well-turned insult is having your friends and acquaintances e-mail to tell you how awesome it was. But if you’re basically pretty good at snotty putdowns — and most bloggers have at least an apprentice-level facility with this art — it’s almost too much fun. It’s too easy. It’s the writing equivalent of skiing the bunny slope.

I have written some epic snark, and I have written a book, and let me just tell you, there is no comparison. Books are hard. Reported features are hard. Sarcasm and outrage are easy, which is why they tend to peak in adolescence, unlike, say, mastery of nuclear physics.

I don’t think Snarkiness is healthy for society, and I think it is often downright sinful for Christians who should know better…

What is your greatest fear?

I've heard before that people's greatest fear is public speaking. As a preacher I've either overcome that or have learned to fake it pretty well, eh? Personally, I think my greatest fears (if I allow myself to think about it) have to do with my children. I won't go into specifics (to write of them would bring them to the mental forefront), but even a common human fear…that of death…for me is mainly a fear of how it will affect my children.

How about you? What is your greatest fear? Was it public speaking or death? Flying on airplane? Spiders? The dark? Clowns? 🙂

We all have fears, and often irrational ones. They really aren't a problem unless they prevent us from living a normal life. We can avoid speaking in public, steer clear of dangerous activities, take a bus across country, stay away from creepy-crawly things, plug in night lights, and never enter a circus tent.

But sometimes fears can overwhelm us, and we've heard of individuals who (for instance) have agoraphobia and refuse to leave their homes. If we had a friend like that we likely would encourage them to visit a psychiatrist.

However, perhaps the worst types of fears are those that keep us from doing the right thing at the right time. Maybe at school you saw a kid get picked on and you should have spoken up, but you kept your mouth shut for fear that the bullying bullseye would move to you. Or maybe at work you made a mistake but you didn't tell anyone because you were worried about getting in trouble (and possibly even lose your job). END_OF_DOCUMENT_TOKEN_TO_BE_REPLACED 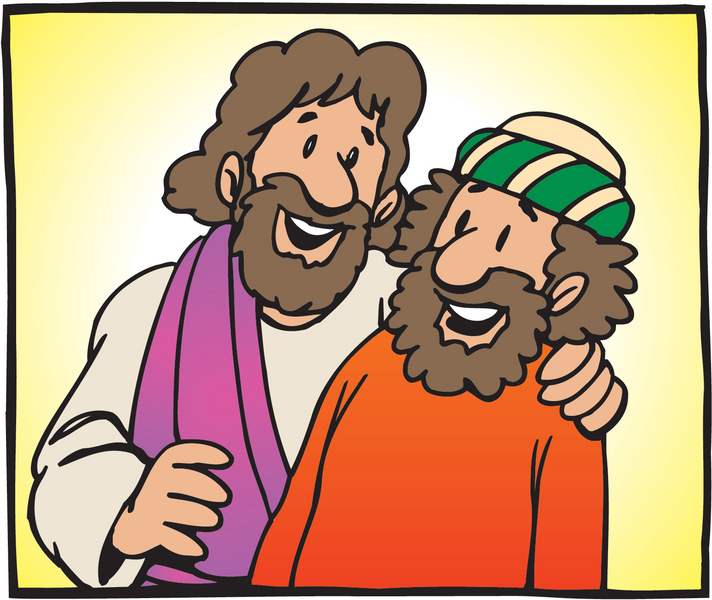 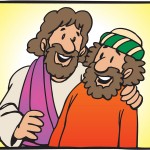 Although I think this is also applicable outside a Christian context, ultimately it's appeal to certain Judeo-Christian mores may limit its relevance to non-Christians.

Throughout web and podcast dialogue it has become popular to be snarky toward people and/or views that one significantly disagrees with. I use the word "snarky" in the context of my Mac's first definition for it:

(of a person, words, or a mood) sharply critical; cutting; snide: the kid who makes snarky remarks in class.

I myself have been guilty of the behavior…it is fun, satisfying, and effective.

Well, "effective" depending on what you are trying to effect.

Let's assume there is a view that is so bad that it warrants your snarkiness. There are two types of people who hold that view: those who are open to changing it if provided with the proper evidence and those who will never come around no matter how convincing your proof is. END_OF_DOCUMENT_TOKEN_TO_BE_REPLACED

A couple weeks back I snuck out to the Hillsborough Circle K on my motorcycle to grab lunch. Although, as seems constant with any food I really enjoy, they've since stopped carrying the cheeseburger rolls I was trekking for…those midday runs are a nice break in a work-from-home day even if all I am rewarded with is ordinary hotdogs (minus the buns, thanks to my low carb diet).

Well, rewarded with hotdogs and the beautiful surroundings our gracious Lord has provided (something you experience far more directly on two wheels and with no vehicular enclosure).

Either way, as I was getting close to my target I passed a gentleman walking the other way on the side of the road. I really can't tell you much about him (I am no Sherlock Holmes), but the way he was strolling made me think, “Here is a guy who has…”

Nowhere to go and nothing to do. END_OF_DOCUMENT_TOKEN_TO_BE_REPLACED