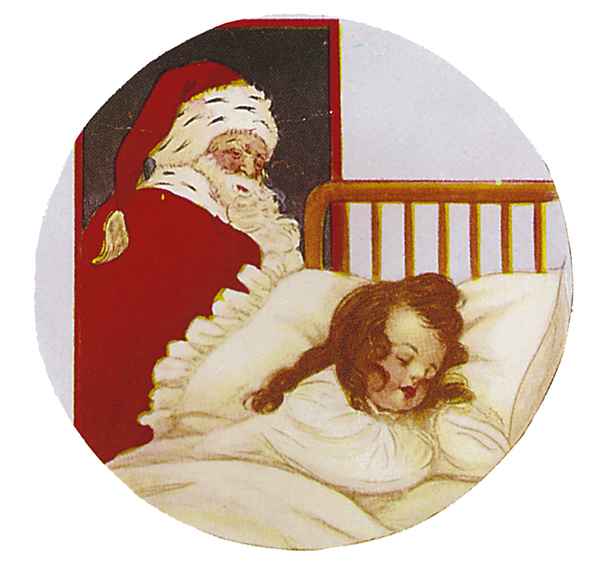 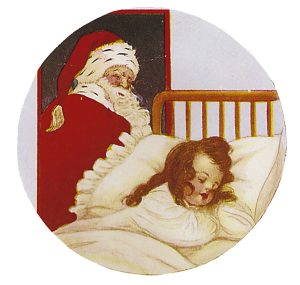 And when you wake up, only really recall you had an inspiration…and no matter how much you torture yourself to remember…you cannot clear your foggy memory?

Well, this sermon is based on one of those situations…where I didn”t loose it entirely, but it is all the more aggravating because I actually could remember it in the morning…but didn’t write it down…and then later forgot the punch-line!

But I did remember the theme. 🙂

When I started composing this sermon there were between 93 and 94 days to guess what?

Being that Michelle and I have a year-round Internet Christmas radio station, it probably doesn’t surprise you I’m speaking of Christmas…

And I assume everyone here is familiar with the holiday tune, “Santa Claus Is Coming to Town”? Do your remember how the part that starts with, “He knows when you are sleeping,” goes?

He knows when you are sleeping

He knows when you are awake

He knows if you’ve been bad or good

So be good for goodness sake

If someone thought too much about those verses, it might be a little frightening. 🙂 Santa Claus is “Big Brother,” watching you all the time?!

However, when I survey the state of the modern world, I suspect much of the evil we see is based on not having a healthy fear of being “found out.”

Let’s chat a bit more about that.

Let me ask you this…

Does anyone here, perhaps, ever drive a bit faster than they should?

Do you do that if you know there is a cop with a radar gun right ahead?

Unless you like paying for a speeding ticket and higher insurance rates, of course not! You slow down to either the speed limit or a value you feel is within the officer’s range of grace.

When people excessively speed, run stop signs, or break other motor vehicle rules…they do it because they don’t believe there is anyone around to call them on it.

They know it is wrong, but they do it anyway.

When people mess around on their spouses…

When people commit all manners of sin, from little white lies to torture and murder…

Do they act like they believe there is “anyone around to call them on it”?

Issue #1 is that no, they don’t believe there is a God who will hold them accountable. But, I’ve got some bad news for unbelievers:

18 For the wrath of God is revealed from heaven against all ungodliness and unrighteousness of men, who by their unrighteousness suppress the truth. 19 For what can be known about God is plain to them, because God has shown it to them. 20 For his invisible attributes, namely, his eternal power and divine nature, have been clearly perceived, ever since the creation of the world, in the things that have been made. So they are without excuse. 21 For although they knew God, they did not honor him as God or give thanks to him, but they became futile in their thinking, and their foolish hearts were darkened. 22 Claiming to be wise, they became fools, 23 and exchanged the glory of the immortal God for images resembling mortal man and birds and animals and creeping things (Romans 1:18-23).

What does Romans say about an unbelievers’ “unbelief”?

They have no excuse, “For what can be know about God is plain to them, because God has shown it to them.”

However, I am not going to quibble over that interpretation. Instead, I am going to suggest it doesn’t matter, because I believe everyone gets special revelation. As I wrote in an article about inclusivism:

What good would that be if it was not for the purpose of finding those who will accept God’s offer of eternal life?

Additionally, what good is a “heart test” if there is no way for the answer to be in the affirmative?

I believe that along with the substantial argument that creation makes for God, the Holy Spirit work on everyone…so their disbelief is their choice. We won’t read all the versus I just mentioned, but let’s look at ones in 1 Chronicles and Jeremiah:

9 “And you, Solomon my son, know the God of your father and serve him with a whole heart and with a willing mind, for the LORD searches all hearts and understands every plan and thought. If you seek him, he will be found by you, but if you forsake him, he will cast you off forever (1 Chronicles 28:9).

20  But, O LORD of hosts, who judges righteously,

who tests the heart and the mind,

let me see your vengeance upon them,

I believe that along with the substantial argument that creation makes for God, the Holy Spirit work on everyone…it is not due some random fate of being born in the wrong place and/or the wrong time…or, worse, our Lord arbitrarily deciding to save some, but not others.

Everyone should believe. Most do not.

The horrible state of this world is due, in great measure, to issue #1: They don’t believe there is a God who will hold them accountable.

Although I like the power of three, for this sermon only two issues seemed appropriate.

Let’s read a couple of verses before I reveal it:

29 Let no corrupting talk come out of your mouths, but only such as is good for building up, as fits the occasion, that it may give grace to those who hear (Ephesians 4:29).

I’m sure you interact with a lot of Christians.

How often does “corrupting talk” come out of their mouths?

I wouldn’t be surprised is issue #2 is a bigger problem than issue #1, because it gives an excuse to those with issue #1 to continue in their disbelief.

Or as Brennan Manning is recorded as saying in the DC Talk song, “What if I stumble?”:

The greatest single cause of atheism in the world today is Christians: who acknowledge Jesus with their lips, walk out the door, and deny Him by their lifestyle. That is what an unbelieving world simply finds unbelievable.

And this isn’t just a dangerous issue for unbelievers. If you or I act like we don’t believe…guess what?

What are your pet sins? The things you do that mean you don’t act like you believe?

Let’s be sure to ask ourselves that. Regularly.

And let’s help each other out. With love, if you see your brother or sister driving off the cliff…

Okay, I may not have felt there was a good set of three issues, but I do have three realities to wrap up this sermon.

I am not going to try to prove reality #1…I’m assuming you wouldn’t be a Christian if you didn’t already agree. 🙂

Reality #2: That God will hold everyone accountable. That is there will be a judgment. Or, as Hebrews 9:27 says:

Life in this world is not fair. God never promised it would be.

But in the afterlife it will be and we will all be measured by the same scale when we die.

If we confess our sins, he is faithful and just to forgive us our sins and to cleanse us from all unrighteousness.

There is a God. He will hold everyone accountable.

It’s not too late: if you confess your sins, he is faithful and just to forgive you your sins.

And that’s a God I am glad exists!