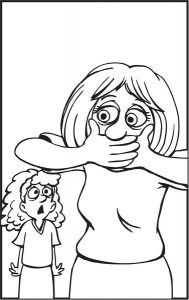 He Allegedly Did It Again

I want everyone to know that I actually decided on the subject of this sermon before President Donald Trump allegedly decided to use an obscene word to describe some countries. I find it interesting that so many in society that warranted this talk are now acting so aghast at his language.

And it is more than ironic that their response is often more foul than his cuss word was.

Is It Wrong to Swear?

I should step back for a moment and see if we have consensus.

Is it wrong to swear?

Notice I didn’t ask, “Is it wrong for Christians to swear?” Although levels of accountability are tied to knowledge, moral laws are universal. We Christians just have less excuse when we break them.

Is it wrong to swear?

I have found the answer to that question, that seems obvious to me, to be impossible to get agreement on with folks, even Christians, who think it’s okay to use curse words.

The reason is that the Bible never flatly says, “Do not use any word that society has categorized as a swear.”

Let me ask you this…

Except potentially in the case where the life of the mother is at risk, is it wrong to get an abortion?

Of course it is!

Does the Bible specifically state, “It is wrong to kill a baby in the womb?”

And, sadly, some Christians will still argue that even abortion is okay.

Basically, if you have a pet sin you’ll do whatever you can to protect keeping it.

What Does the Bible Say?

Well, enough preamble. Today’s sermon is going to be short. Let’s look at some verses, one right after the other, and then have a conversation about them.

29 Let no corrupting talk come out of your mouths, but only such as is good for building up, as fits the occasion, that it may give grace to those who hear (Ephesians 4:29).

4 Let there be no filthiness nor foolish talk nor crude joking, which are out of place, but instead let there be thanksgiving (Ephesians 5:4).

8 But now you must put them all away: anger, wrath, malice, slander, and obscene talk from your mouth (Colossians 3:8).

17 Repay no one evil for evil, but give thought to do what is honorable in the sight of all. 18 If possible, so far as it depends on you, live peaceably with all (Romans 12:17-18).

20 We take this course so that no one should blame us about this generous gift that is being administered by us, 21 for we aim at what is honorable not only in the Lord’s sight but also in the sight of man (2 Corinthians 8:20-21).

34 You brood of vipers! How can you speak good, when you are evil? For out of the abundance of the heart the mouth speaks (Matthew 12:34).

If your mind automatically counts things…you’ll notice that the references are in groups of three, two, and one.

Can you see any way swearing wouldn’t run afoul of at least one of those?

Sure, like those who argue that the Bible doesn’t really condemn homosexuality (at least “modern” homosexuality), you can try to muddy the meaning of each verse…and I’ll admit that you might be right about one of them. However, seriously, when have you ever heard someone use a coarse word and you wouldn’t describe it as corrupting talk, filthiness, crude, or obscene?

I mean…since most swear words are connected to:

They are not corrupting, filthy, crude, nor obscene?

If you have a pet sin you’ll do whatever you can to protect keeping it.

Romans 12:17-18 tells us “to do what is honorable in the sight of all” and as” far as it depends on you, live peaceably with all.”

2 Corinthians 8:20-21 says of Paul and his faithful brothers that they “aim at what is honorable not only in the Lord’s sight but also in the sight of man.”

First…just to make sure we agree on this point…should you and I aim for the same things God’s faithful in the first century aimed for? More specifically, what Paul and his faithful brothers aimed for?

So, based on that…

Is cursing “honorable in the sight of all”?

Does swearing help you live peaceably with all?

Is coarse language “honorable in the Lord’s sight” and or “in the sight of man”?

Well, in this sermon we are trying to answer whether it is honorable in the Lord’s sight (although I think we answered it with our discussion of the group of three Bible references).

But is coarse language honorable “in the sight of man?”

In the sight of some men, yes. But many…albeit seemingly a diminishing amount…say, “No.”

The answer, of course, to all those questions…is, “No!”

Even when you do see Christians argue that swearing is perfectly okay, do you ever see them attempt to postulate that it is actually good?

I cannot recall seeing that…because even they know there is something not fully fine about it.

Oh…actually…I should note that it’s not just your reputation that you should care about when you choose what words come out of your mouth. You are representatives of the Most High. What you do reflects on Him.

When you reflect badly on Him, you are blaspheming His name.

If nothing else in this sermon has, that you give you pause.

I grouped the three first references as “words” and the second two as “reputation.” The last one I categorize as “your heart.” Let’s reread Matthew 12:34.

34 You brood of vipers! How can you speak good, when you are evil? For out of the abundance of the heart the mouth speaks.

If you gossip about people…it reflects your heart.

If you say things to hurt people…it reflects your heart.

If you lie…it reflects your heart.

If you use the F word, the S word, the <fill in the word here> word…it reflects your heart.

Is that what you really want?

Time to wrap-up. I have made three arguments for not using coarse language:

However, before I give my final reason to not swear…let’s talk about some arguments I’ve heard that swearing is okay for Christians.

#1 – They are just words. It only matters if they are used to be mean.

My response to, “They are just words”?

Pornographic pictures are just pictures, but most sane people would not argue there are some pictures that aren’t appropriate.

And less someone try to wrestle more on this, not all pornographic pictures that are considered inappropriate or public consumption are “mean,” “exploitative,” or “sexual.”

Okay, even if we accept that that happened at least once (for instance, Paul is accused of using the equivalent of the S word)…my response?

Having a few…or even a dozen…recorded cases of coarse words in the Scripture doesn’t negate the clear command not to use corrupting, filthy, crude, obscene, nor dishonorable language.

Okay, let’s do one more…which is not just used to excuse swearing…

Can you guess what my answer to this one is?

Ultimately, any sin you choose over God will keep you on the wrong side of the Pearly Gates…but even ignoring that…

Nothing says we have to spend time condemning every “worse” sin a “minor” one. I can agree that, theoretically, I would rather have someone curse than murder (or even gossip)…but what kind of horrible excuse is “there are worse things we should focus on”?

And, by the way, considering we learned from Jesus himself that what comes out of our mouth reflects our hearts, then maybe we should be a little more concerned if we have a potty mouth.

I don’t want a potty heart. You?

Speaking of Jesus…my last reason not to use coarse language?

When you are dropping F-bombs, telling people you don’t give a D, or using whatever curse words that are stored in your brain…

Ask yourself, what would Jesus do?

And I think if your honest you’ll know He wouldn’t be swearing.

But, praise God, that same Jesus you should emulate by not using cuss words knows all your weaknesses, and if you slip…and you ask for forgiveness…

But turn to Him if you slip…

Because we truly have a friend in Jesus.