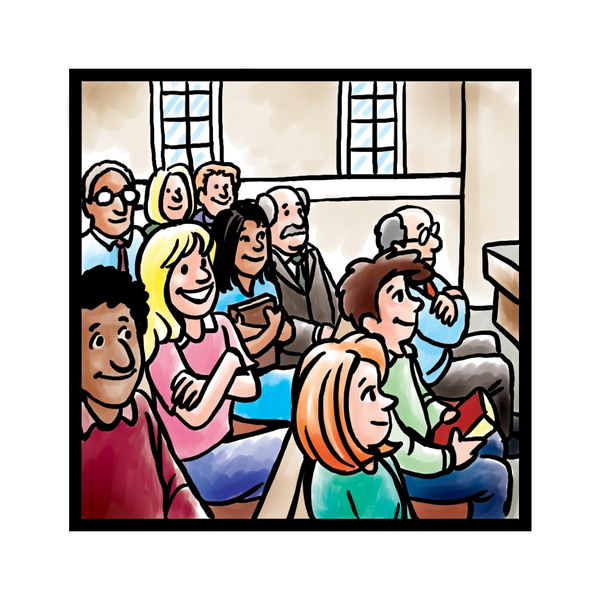 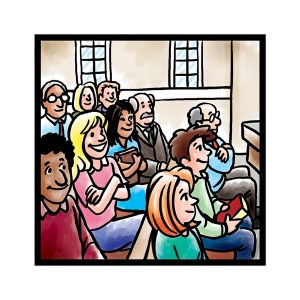 When you think of family, what comes to mind? Does it cause you to break out in a big smile? A sad face? A grimace? Comedian Richard Lewis said:

We had a depression fair in the backyard. A major game there was Pin the Blame on the Donkey.1

Is that your family? 🙂

I looked up my family tree and found out I was the sap.2

Okay, one more…how about this from Brent Cushman:

I go visit my nephews. I get out of the car. They see me and drop what they’re doing and hug my legs. I feel like the most important person on God’s earth. Seven minutes later I would trade their pelts for whiskey. I look down at them. “How could you be so obnoxious?” Then I look at my brother.3

Is that your family?

There are tons of jokes about families or family members because, well, it’s complicated. 🙂

Friday night, about 15 people…many from this church…came over for a barbecue and a backyard movie. Although we were tired by the time everyone said goodbye and headed off into the night, Michelle and I really enjoyed it. The combination of neighbors, Cub Scout folks, and congregation members…all friends…felt like…well…

And the fact that many were from here was a big part of that. When we first started a year and a moth-ish ago, we knew being a family was important…and I think we have become one. Are we always at each other’s home, calling or texting each other incessantly, and so on? No…but I don’t do that with my own family…well…other than Michelle and Augie…who are stuck with me. 🙂

However, we genuinely care about each other…miss each other when one of us misses church…and actually want to see each other.

And, sadly, that’s not always true about blood families.

12 So then, brothers, we are debtors, not to the flesh, to live according to the flesh. 13 For if you live according to the flesh you will die, but if by the Spirit you put to death the deeds of the body, you will live. 14 For all who are led by the Spirit of God are sons of God. 15 For you did not receive the spirit of slavery to fall back into fear, but you have received the Spirit of adoption as sons, by whom we cry, “Abba! Father!” 16 The Spirit himself bears witness with our spirit that we are children of God, 17 and if children, then heirs—heirs of God and fellow heirs with Christ, provided we suffer with him in order that we may also be glorified with him.

18 For I consider that the sufferings of this present time are not worth comparing with the glory that is to be revealed to us. 19 For the creation waits with eager longing for the revealing of the sons of God. 20 For the creation was subjected to futility, not willingly, but because of him who subjected it, in hope 21 that the creation itself will be set free from its bondage to corruption and obtain the freedom of the glory of the children of God. 22 For we know that the whole creation has been groaning together in the pains of childbirth until now. 23 And not only the creation, but we ourselves, who have the firstfruits of the Spirit, groan inwardly as we wait eagerly for adoption as sons, the redemption of our bodies. 24 For in this hope we were saved. Now hope that is seen is not hope. For who hopes for what he sees? 25 But if we hope for what we do not see, we wait for it with patience.

I know that was a long selection, but did you catch the word, beginning with an “a,” that was mentioned twice?

“For you did not receive the spirit of slavery to fall back into fear, but you have received the Spirit of adoption as sons…”

“And not only the creation, but we ourselves, who have the first fruits of the Spirit, groan inwardly as we wait eagerly for adoption as sons…”

But before we discuss those…let’s look quickly at Galatians 4:1-7:

4 I mean that the heir, as long as he is a child, is no different from a slave, though he is the owner of everything, 2 but he is under guardians and managers until the date set by his father. 3 In the same way we also, when we were children, were enslaved to the elementary principles of the world. 4 But when the fullness of time had come, God sent forth his Son, born of woman, born under the law, 5 to redeem those who were under the law, so that we might receive adoption as sons. 6 And because you are sons, God has sent the Spirit of his Son into our hearts, crying, “Abba! Father!” 7 So you are no longer a slave, but a son, and if a son, then an heir through God.

“…to redeem those who were under the law, so that we might receive adoptions as sons. And because you are sons…”

I said this little congregation feels like family…and it should. Regardless of who your parents were…who their parents were…and so on and so on…

You have now been adopted as sons of daughters into God’s family. Now, I know that the second use of the word “adoption” in what we read said, “As we wait eagerly for adoption as sons,” but I would suggest that is just part of the “now, not yet” approach in the Bible.

We know especially from the third use of “adoption” that we are already sons and daughters of the Most High (“and because you are sons” and “you are no longer a slave, but a son”) — that is the “now.”

However, there is a finality to our adoption when Jesus returns, and thus “we wait eagerly for adoption as sons, the redemption of our bodies” — that is the “not yet.”

“So what Alan? Great, we’re a family…how do I apply that in the ‘now’ versus waiting for the ‘not yet’?”

First, I want to remind you that the family of God is more permanent than your family of blood. Now, it’s true that if your relatives are saved, then you will be with them for eternity…but not because of your blood and their blood…but because of the blood of Christ…

…that made you and them be in the same heavenly family.

Your adopted family is more permanent than your biological one. Something important to consider.

Second, staying true to God may force you to make a very difficult choice. Jesus speaks of it in Luke 14:25-26:

25 Now great crowds accompanied him, and he turned and said to them, 26 “If anyone comes to me and does not hate his own father and mother and wife and children and brothers and sisters, yes, and even his own life, he cannot be my disciple.

Those are hard words to hear…and no…our Lord doesn’t want you to despise your relatives. Instead, Christ was using hyperbole to make a point…one that might be a bit clearer in Matthew 10:37:

You cannot love you earthy parents more than your Heavenly Father (or His Son). If you do, you are not adopted into the family of God. I hope you never have to choose between your biological family and the Lord, but if you do…what should you do?

You should choose your church family. As much as they are truly an extension of the Father who has adopted them, choosing your adopted family is choosing God.

Please note I said, “As much as they” instead of, “As much as we.” Yes, we are a family…but that is too narrow a picture of the family of God. Just as the church is the universal body of believers, not just our little Pizza Shop contained group, the family of God is everyone who is saved, past, present, and future. That hard choice, if you ever have to make it, might be for brothers and sisters in Christ you’ve never met.

Let’s all promise, as a Christian family, to be faithful to each other and anyone God puts in our path. It’s a hard, scary world out there…we truly need each other…and as I ended in our very first sermon on August 21, 2016:

We are children of the Most High, adopted as brothers of sisters into the family of God…into the body of Christ. We were all chosen to be specific parts of that body: “If all were a single member, where would the body be? As it is, there are many parts, yet one body.”

I need you. You need me. We need each other. Every one of us needs every other one of us.

When you leave here today, if you remember one thing…remember that…