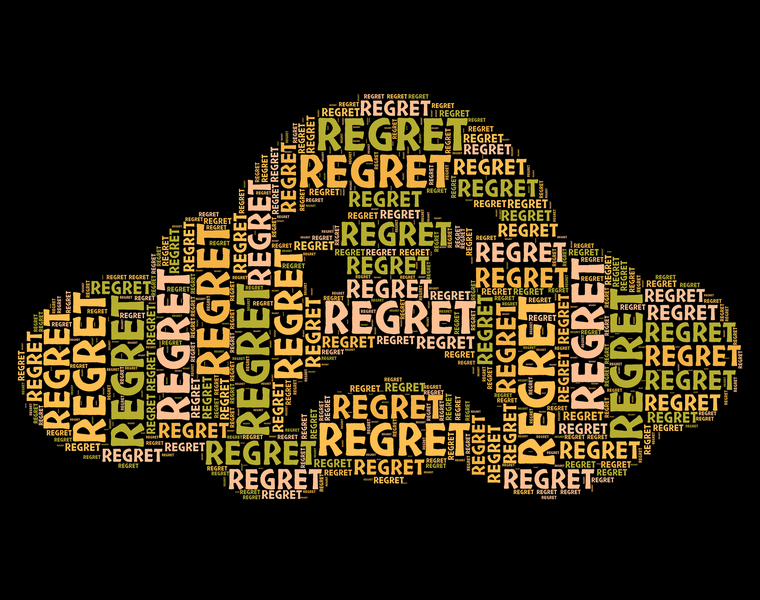 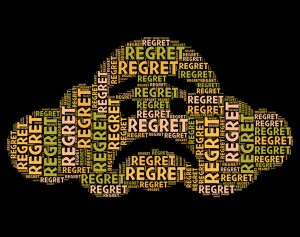 I think any human with a conscience regrets over time…hindsight has a way of ensuring that. We are not like Adolf Eichmann, a major player in the Holocaust, who (while on trial in Israel), said:

To sum it all up, I must say I regret nothing.1

Of course, he may have just been pretending…but one would have to have a totally seared conscience to have been heavily involved in Nazi atrocities. Instead, I am like Letitia Elizabeth Landon, who may have only lived 36 years in the early 1800s, but lived long enough to pen this in her poem Despondency:

Were it better to forget

Than but remember and regret?

It is better to forget than regret in my opinion…as someone who, when he looks back, regrets much. You?

How about God? Does God regret? Also, does relent?

Does God decide He is going to do something, and then change His mind?

If God regrets, He is not omniscient.

How about relent? Saying God relents would mean He changes His mind. That He planned on doing something, but an outside force caused Him to reverse those plans. Since immutable means unchanging…

If God relents, He is not immutable.

Do you understand what it’ll mean if we find out the Lord regrets or relents…or both?

Let’s open Scripture first to Genesis 6:5-8…just before the flood:

5 The LORD saw that the wickedness of man was great in the earth, and that every intention of the thoughts of his heart was only evil continually. 6 And the LORD regretted that he had made man on the earth, and it grieved him to his heart. 7 So the LORD said, “I will blot out man whom I have created from the face of the land, man and animals and creeping things and birds of the heavens, for I am sorry that I have made them.” 8 But Noah found favor in the eyes of the LORD.

Well…let’s not worry too much yet. That’s only one set of verses. A fluke. We’ll do better later in the Bible. How about 1 Samuel 15:9-11, after Israel’s first king, chosen by God, has been reigning a bit:

9 But Saul and the people spared Agag and the best of the sheep and of the oxen and of the fattened calves and the lambs, and all that was good, and would not utterly destroy them. All that was despised and worthless they devoted to destruction.

10 The word of the LORD came to Samuel: 11 “I regret that I have made Saul king, for he has turned back from following me and has not performed my commandments.” And Samuel was angry, and he cried to the LORD all night.

Double uh oh. But, did God really regret making Saul king? Reading a bit later in 1 Samuel 15:34-35 will help us clear that up:

34 Then Samuel went to Ramah, and Saul went up to his house in Gibeah of Saul. 35 And Samuel did not see Saul again until the day of his death, but Samuel grieved over Saul. And the LORD regretted that he had made Saul king over Israel.

When the Almighty made Adam and Eve, didn’t He know that in the future “that the wickedness of man [would be] great in the earth, and that every intention of the thoughts of his heart [would be] only evil continually”?

When the Most High selected Saul to be king, did he not know that Saul would not faithfully follow His commands?

Was He unaware of the future? Was He not omniscient?

It’s not looking good for omniscience, is it? Before we chat more about that, how about relenting? Does God change His mind?

To answer that, let’s first look at a conversation between Moses and Him after the Israelites worshiped a golden calf:

7 And the LORD said to Moses, “Go down, for your people, whom you brought up out of the land of Egypt, have corrupted themselves. 8 They have turned aside quickly out of the way that I commanded them. They have made for themselves a golden calf and have worshiped it and sacrificed to it and said, ‘These are your gods, O Israel, who brought you up out of the land of Egypt!’ ” 9 And the LORD said to Moses, “I have seen this people, and behold, it is a stiff-necked people. 10 Now therefore let me alone, that my wrath may burn hot against them and I may consume them, in order that I may make a great nation of you.”

11 But Moses implored the LORD his God and said, “O LORD, why does your wrath burn hot against your people, whom you have brought out of the land of Egypt with great power and with a mighty hand? 12 Why should the Egyptians say, ‘With evil intent did he bring them out, to kill them in the mountains and to consume them from the face of the earth’? Turn from your burning anger and relent from this disaster against your people. 13 Remember Abraham, Isaac, and Israel, your servants, to whom you swore by your own self, and said to them, ‘I will multiply your offspring as the stars of heaven, and all this land that I have promised I will give to your offspring, and they shall inherit it forever.’ ” 14 And the LORD relented from the disaster that he had spoken of bringing on his people (Exodus 32:7-14).

Uh oh. It sure looks like an outside force…in this case Moses…got God to change His mind. However, once again, one biblical reference does not prove a doctrine. To make sure we aren’t misunderstanding, let’s see what happened after King David sinfully ordered a census in Israel:

15 So the LORD sent a pestilence on Israel from the morning until the appointed time. And there died of the people from Dan to Beersheba 70,000 men. 16 And when the angel stretched out his hand toward Jerusalem to destroy it, the LORD relented from the calamity and said to the angel who was working destruction among the people, “It is enough; now stay your hand.” And the angel of the LORD was by the threshing floor of Araunah the Jebusite. 17 Then David spoke to the LORD when he saw the angel who was striking the people, and said, “Behold, I have sinned, and I have done wickedly. But these sheep, what have they done? Please let your hand be against me and against my father’s house” (2 Samuel 24:15-17).

Double uh-oh. Unlike the first case, where the Israelites clearly deserved what God planned…someone could argue here that the nation did not deserve to be punished for David’s sin…so maybe that’s why God relented.

But, if that is true…why did He send the pestilence to begin with?! Did our Lord relent because He regretted what He did in response to King David’s wrongdoing?

If God regrets, He is not omniscient.

If God relents, He is not immutable.

The Rest of the Story

Any thoughts on how I could have previously proven God was both omniscient and immutable, yet I have now given you five scriptural references that appear to contradict that?

First, for everyone who did hear “Anthony’s Sermon on Why and How Is God…God” (parts 1 through 3), did I prove the Almighty is both omniscient and immutable?

Good…I was hoping that I didn’t need to go back over those two. 🙂

So, how do we handle the apparent contradiction?

I think little Aliyah can help us answer that. It might still be a little early…but some point as a toddler she might be able to explain how a car works. However, when she does, would we expect her to explain it like a mechanic would? Do you think at two or three years old she’ll mention how it has an internal combustion engine, that the breaks use friction to slow it down, or that the ignition leverages a solenoid to send a large voltage to start the car?

Or might she just talk about how her daddy or mommy use a key to start it, the wheels go round-and-round, and her parents won’t let her play with the windows? 🙂

Aliyah can only explain things based on the limits of her ability to understand and her vocabulary. That does not mean she is wrong. However, the more we know about a vehicles inner workings, we might find some of a young child’s description to be lacking…that at a level they are right…but if carried forward too literally…the are incorrect.

God is an infinite being.

We are finite beings.

When we describe the actions of God, we are like toddlers. We use the words and concepts we understand.

Of course, you could come back and suggest that God’s inspired writers could truly understand that the Most High does not regret or relent.

And they did! We saw that in previous sermons.

But, if a mechanic went to write a book about automobiles for toddlers, he or she would use words and concepts a toddler would understand. You know, how the key starts the car, the wheels go round-and-round, and they shouldn’t play with the windows. 🙂

In the cases we read…and all others…God was just trying to make a point in a way the readers and listeners could understand.

Did saying He regretted making man and appointing Saul king make it clear that both has totally hosed up?

Did saying He relented from destroying Israel and then Jerusalem make it clear that if it weren’t for the grace of our Lord, they would have been…rightly…doomed?

I know that truth does not contradict truth, and the truth is that God is both omniscient and immutable. He does not regret and relent the way we do.

We are not gods with a capital G.

At this point you might be asking yourself, “Why did Alan preach this sermon?”

Because there are many times the Bible appears to contradict itself. God’s enemies will use this fact to attack your faith.

If you aren’t prepared, they may succeed in undermining your faith. A small crack in a damn can ultimately lead to it bursting.

Don’t let anyone put a crack…or even a nick in your damn.

1Non-biblical quotes are from the sixteenth edition of Bartlett’s Familiar Quotations.