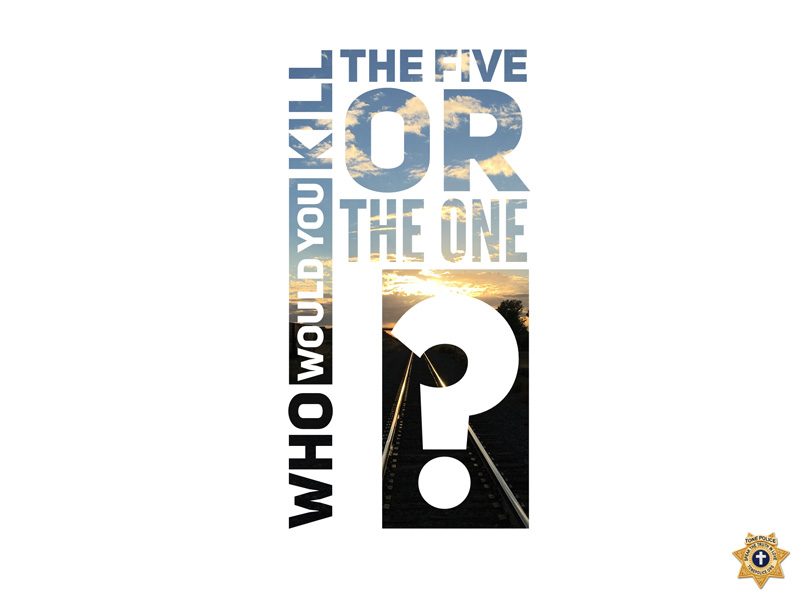 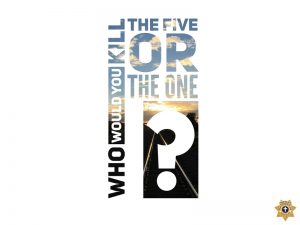 Thou Shalt Not Kill

We are going to jump right into Scripture today, starting with Exodus 20:13. Although I normally use the English Standard Version, I’m going to quote from the King James Version since its translation is the way I learned this commandment:

What shouldn’t you do?

Now, having said that, the English Standard Version probably gives a better idea of what the commandment means with its:

What shouldn’t you do?

Given we all concur we shouldn’t murder each other, our neighbors, or anyone else…let me share a situation in a Ted Talk video a wonderful listener and friend, Evette, sent my way on Facebook. It was called the Trolley Problem1, and it goes like this:

There is a train barreling down the track, heading toward five workers who will not be able to get out of the way and will be killed.

You are near a switch that, if you pull it, will send the train down another track.

The bad news is on the other track is another worker who will die if you flip the switch.

What do you do?

Then the video adds a wrinkle to it:

Instead of there being two tracks, there is one and you are standing on a bridge over it. Same situation with five workers, but this time there is a huge person beside you that, if you push them off the bridge and onto the track, will stop the train.

What do you do?

Not surprisingly, statistically folks are less likely to push the guy off the bridge than flip the switch.

But, in both cases, what would be the moral thing to do?

You could try to avoid the “Who would you kill?” question two ways…

First, you could argue it is unrealistic…that the situation never happens.

However, I would suggest that the equivalent has has happened myriad times over the ages…especially in war, where a leader may have to sacrifice some soldiers to save many other servicepeople or civilians.

Yes, it might be unlikely to happen to you, having to choose one life over another (or others)…but it isn’t impossible. Additionally, technology is thrusting the problematic situation onto us in other ways.

Take an autonomous car. If it discovers it is in a situation where either a pedestrian or its passenger will be hurt, perhaps killed, who should it protect?

Who would you kill, the pedestrian or the occupant?

Of course, you could then try to avoid that question by saying, “Let’s just outlaw autonomous cars.” My guess is that, if it hasn’t been already, it won’t be long before it’ll be proven that less people will die if all cars are self-driving. So, if you prevent autonomous cars from being made you are choosing to kill many people in accidents that wouldn’t have happened if you, instead, had embraced the technology.

Self-driving cars don’t program themselves. Somebody like you or me has to. When you write those specific lines of programming code that make the split-second decision…

Who do you kill, the pedestrian or the occupant?

Does this all make your head hurt? 🙂

It should at least a bit…these aren’t easy questions with easy answers. If you have a conscience, they should be painful.

Now, I told you there were two ways you could try to avoid the question…saying it wasn’t realistic was #1. However, I’ve shown…especially in our modern times when we develop technology that must make life or death decisions…it isn’t far-fetched.

The second way avoiding the question is saying, “Well, I just won’t do anything…then it will not be my fault whether the five or the one die.”

You Are Responsible for Your Inaction Too

But, is that true? To decide, let’s head back into the Old Testament and read a couple selections, starting with Exodus 21:28-29:

In that case inaction, not keeping an ox penned up even though you knew it was dangerous, was to be punished with what?

So, was the inaction wrong?

Let’s go a few books further to Deuteronomy…Deuteronomy 22:8 to be specific…and see what it says:

“When you build a new house, you shall make a parapet for your roof, that you may not bring the guilt of blood upon your house, if anyone should fall from it.

Do you know what a parapet is? In Google last night it stated it was “a low protective wall along the edge of a roof, bridge, or balcony.”

Given that, what would be its purpose around a roof?

To keep someone from falling off and being injured or killed.

Again, God is telling you that you can be responsible for the results of your inaction…in this case, not protecting others from a hazardous situation.

You are just as responsible for the results of your inaction as your action. For your sins of omission as much as your sins of commission.

What would the moral thing to do?

And where do we find answers to moral questions?

Right! The Bible of course! 🙂

However, after you’ve read the Bible end-to-end, you realize it is not an manual listing what to do in every situation. Sometimes it is very specific, for instance, you should not murder or steal or commit adultery…but often we instead have to apply its general principles to specific circumstances.

And if you think of it, even those simple “thou shalt not murder,” “thou shalt not steal,” and “thou shalt not commit adultery” must be applied as principles. For instance, Jesus said lusting in your heart is the equivalent of adultery (see Matthew 5:28) and John stated that whoever hates his brother is a murderer (see 1 John 3:15)?

So, what principles can we apply to the question, “Who would you kill, the one or the five?”

Principle #1: When you make the decision, love your neighbor as yourself.

That is, don’t make the decision based on personal self-interest. One of the ways I thought of complicating the Trolley Problem…for pragmatic people who would quickly choose to flip the switch and have the train run over the one worker was to ask…

What if that one worker was your son or daughter?

Then would you flip the switch?

Should your answer be any different?

Not if you love your neighbor as yourself. The five are somebody’s sons or daughters too.

Principle #1: When you make the decision, love your neighbor as yourself.

The next principle is derived from Romans 14:5

5 One person esteems one day as better than another, while another esteems all days alike. Each one should be fully convinced in his own mind.

This verse as pointed at a different situation, but it still holds…

Principle #2: When you make the decision, it’s your decision.

That is, you cannot decide based on what someone else tells you should do. That does not let you off the hook. It is up to you to prayerfully consider what the God teaches through the Bible and the Holy Spirit…and then choose.

And I wouldn’t wait until such a situation is thrust upon you. Then it’ll be too late to make a conscious decision. You’ll be just reacting…followed probably by regretting.

Principle #2: When you make the decision, it’s your decision.

20 Do not, for the sake of food, destroy the work of God. Everything is indeed clean, but it is wrong for anyone to make another stumble by what he eats. 21 It is good not to eat meat or drink wine or do anything that causes your brother to stumble. 22 The faith that you have, keep between yourself and God. Blessed is the one who has no reason to pass judgment on himself for what he approves. 23 But whoever has doubts is condemned if he eats, because the eating is not from faith. For whatever does not proceed from faith is sin.

Principle #3: When you make the decision, do it from faith.

That is, if you think it is wrong…it is wrong. Don’t do it. If you really think pulling the switch is wrong, then don’t pragmatically decide to save the five to net four lives. Go with your conscience.

I’m not saying you’ll be comfortable with your decision either way…but I can tell you if you think choice A is right and choice B is wrong…you definitely should not choose choice B. That would not be choosing “from faith.” If you think it is wrong…it is wrong. Don’t do it.

Principle #3: When you make the decision, do it from faith.

43 “You have heard that it was said, ‘You shall love your neighbor and hate your enemy.’ 44 But I say to you, Love your enemies and pray for those who persecute you, 45 so that you may be sons of your Father who is in heaven. For he makes his sun rise on the evil and on the good, and sends rain on the just and on the unjust. 46 For if you love those who love you, what reward do you have? Do not even the tax collectors do the same?

Principle #4: When you decide, do not have favorites.

That is, don’t make your decision based on who the five or who the one is.

I touched on this a bit with principle #1, indicating that you shouldn’t decide not to flip the switch because it was your son or daughter on the second track…but the first comment I saw on the Ted Talk video had a person asking what if the five workers were criminals?

You decision should not be based on the “who” of “who will be killed.”

Principle #4: When you decide, do not have favorites.

Here is where I apologize to Evette and to you.

Instead I have, in essence, told you that you have to prayerfully figure it out yourself using principles I’ve shared along with others in Scripture.

But I started off reminding you that the Bible is not a manual listing what to do in every situation.

And personally, I don’t think God wants it to be easy. We learn more when we are forced to figure it out than we learn when someone, in each and every circumstance, tells us what to do.

Not to mention, the Jewish leaders in Jesus’ day created plenty of rules…you might remember what I shared once about how the Talmud has 24 chapters of just Sabbath regulations.

And what did those people who had so many rules for so many situations do?

They crucified their Messiah!

So, instead of telling you what to do…or even what I would do…I leave you with four principles to decide if you kill the five or kill the one.

Well, technically six…because before I gave the four I snuck in that you should not kill and that you are responsible for inaction as much as action. But we won’t officially count those. 🙂

Who would you kill?

I’m going to wrap up with one more verse, which I think epitomizes applying those four principles…but I’m not going to tell you how. You’ve heard these words many, many times…at least I hope so.