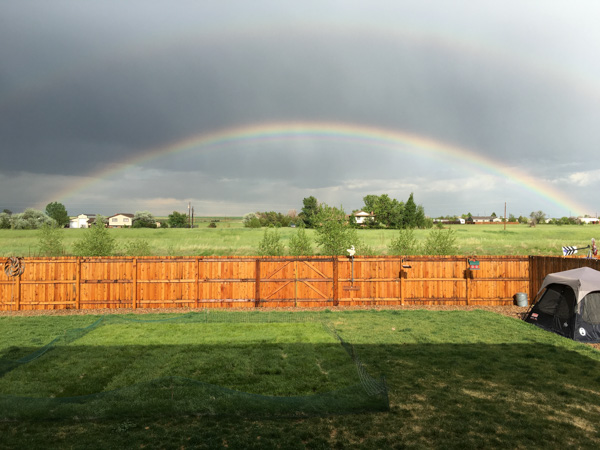 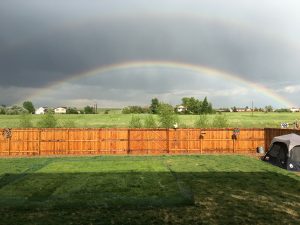 And one of the greatest things about living in Strasburg, Colorado is that not only are there quite a few of them, our open fields mean often we can see them end-to-end…resulting in some spectacular views.

When you see a rainbow, what does it remind you of?

For me, it brings to mind what may be the most famous promise from God in the Bible. Backstory is that humanity has become so degraded and evil, God kills all but eight with a worldwide flood (see 1 Peter 3:18-22). Noah and his family are spared…and afterward…I suspect…might worry about it happening again. Enter God:

So…when I look out past my backyard and see a rainbow…I remember God’s gracious promise to…even if we deserve it (and we probably do)…flood the world again.

Oh, and is that promise for us? How do you know?

Yes, it is…and we know because it says “and your offspring after you.” We are all decedents of Noah…his offspring.

What’s in a Promise?

However, in my mind, a promise additionally means the person promising it to you has the opportunity to not fulfill it. For instance, I can state, “I promise the sun will rise tomorrow.” But, is that really a promise or a statement of fact?

If, instead, I say, “I promise this sermon will be significantly shorter than the last two weeks’ talks were”…that is something I can totally fail at. It could be longer.

But, by the way, I promise this sermon will be significantly shorter than the last two week’s talks were. 🙂

I mean, it’s a holiday weekend…put God first…but spend time with your family!

Back to biblical promises.

We have read the most famous one together…God will never, ever, ever, ever flood the entire world again…and sends us rainbows to remind us of that. Let’s look at some others…

What is the first promise in Scripture?

Understanding the Bible does not record everything our Lord has said…I think it is this:

14 The LORD God said to the serpent,

“Because you have done this,

cursed are you above all livestock

and above all beasts of the field;

on your belly you shall go,

and dust you shall eat

all the days of your life.

15  I will put enmity between you and the woman,

he shall bruise your head,

Have you ever heard the funky Latin term for that promise? “Protoevangelium” or “first gospel.” It is felt that God, right from the fall, promised our Savior…”her offspring”…Jesus…overcoming the serpent.

Now, that is an awesome first promise, isn’t it?!

Okay, I do realize that you could argue that earlier in Genesis when God says, “…but of the tree of the knowledge of good and evil you shall not eat, for in the day that you eat of it you shall surely die” (Genesis 2:17)…some might call that a promise…or a threat for that matter…but I would call that a statement of fact.

So…first promise…and God did not have to do this…the Most High promised to send a Savior to fix the problem of sin.

Okay, we’ve seen the most famous promise and the first promise…but what is your favorite promise in the Bible?

My immediate reaction to that question is found in Hebrews 13:5…but we’ll read verses five and six:

5 Keep your life free from love of money, and be content with what you have, for he has said, “I will never leave you nor forsake you.” 6 So we can confidently say,

“The Lord is my helper;

I will not fear;

Let me sneak in two other quick ones that top my list. First, Jesus promising to come back and get us:

14 “Let not your hearts be troubled. Believe in God; believe also in me. 2 In my Father’s house are many rooms. If it were not so, would I have told you that I go to prepare a place for you? 3 And if I go and prepare a place for you, I will come again and will take you to myself, that where I am you may be also. 4 And you know the way to where I am going” (John 14:1-4).

Jesus is preparing a place for us…and if that isn’t enough…He’s going to personally come back and escort us to our new home. And yes, we do know the way to where He went…it’s through Him!

Okay…before we head on to the final section of this talk…this one also tops my list of favorite promises. Sadly, it’s because I need it so much. 🙁

If we confess our sins, he is faithful and just to forgive us our sins and to cleanse us from all unrighteousness (1 John 1:9).

Yes…I did include that verse in last week’s talk too. Here’s hoping that you don’t need that promise from our Lord as much as I do…but I suspect…if you truly understand how horrible even the “smallest” sin is…you are also comforted by those assurances. Something we should probably remind ourselves of daily.

Time to wrap things up.

See, I promised this would be significantly shorter. 🙂

We’ve looked at the most famous promise, the first promise, and favorite promises.

What is the most important promise in the Bible?

Now, the answer to that question…short of God specifically stating which one is is…is subjective like, “What is your favorite promise?”

However, I would argue that…

…this is the most important promise in the Scripture:

25 About midnight Paul and Silas were praying and singing hymns to God, and the prisoners were listening to them, 26 and suddenly there was a great earthquake, so that the foundations of the prison were shaken. And immediately all the doors were opened, and everyone’s bonds were unfastened. 27 When the jailer woke and saw that the prison doors were open, he drew his sword and was about to kill himself, supposing that the prisoners had escaped. 28 But Paul cried with a loud voice, “Do not harm yourself, for we are all here.” 29 And the jailer called for lights and rushed in, and trembling with fear he fell down before Paul and Silas. 30 Then he brought them out and said, “Sirs, what must I do to be saved?” 31 And they said, “Believe in the Lord Jesus, and you will be saved, you and your household.” 32 And they spoke the word of the Lord to him and to all who were in his house. 33 And he took them the same hour of the night and washed their wounds; and he was baptized at once, he and all his family. 34 Then he brought them up into his house and set food before them. And he rejoiced along with his entire household that he had believed in God (Acts 16:25-34).

Yes, other verses note the importance of repentance and so on, but if you believe in Jesus…truly believe in Him…you will repent and be baptized (Acts 2:38) and you will “confess with your mouth that Jesus is Lord and believe in your heart that God raised him from the dead” (Romans 10:9).

And you will be saved.

If You Have Not…

Where He belongs in your heart.

Sin is a fact.

The untreated results of sin is also a fact…an the eternal results of your untreated sin is an even worse fact.

But the treatment is free via a simple, but infinite, promise.

If you accept that promise, then Jesus will never leave you nor forsake you.