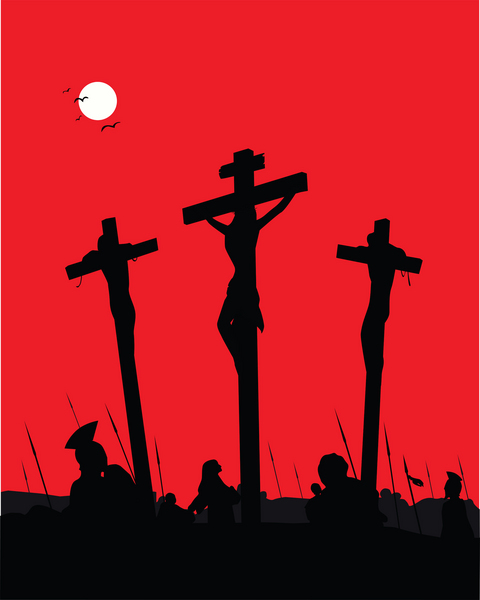 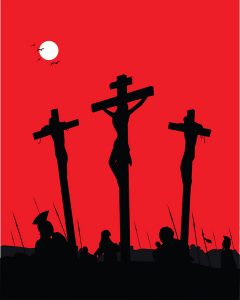 Kids…as best as you can…this week I need you to pay attention. No, I won’t make you put everything away…but you’ll shortly understand why this week and next you shouldn’t tune me out. So…

Do I have your attention?!

Do I have your attention?! 🙂

Early this week I asked Augie what I should do a sermon on. He responded that I should preach about Jesus on the cross and Jesus coming back.

What do you think? Were those good suggestions?

They were awesome suggestions!

So far so good?

And the reason, [fill in the kid’s names here], I need you to pay attention is that although this sermon is titled “Augie’s Sermon on the Cross”…it’s not just for him…it’s for you too.

Do I still have your attention? 🙂

Now, in order to preach to you, I figure there are some rules. Can you tell me if I have them right?

Did I get that right? Three simple rules and we’re good?! 🙂

Let’s repeat the together:

Related to those three rules, let me share a quick story about a famous physicist who was also a very fun guy, Richard Feynman. One time he promised to write a lesson about a really difficult topic for students who were starting their first year of college.

He failed at that and said, “You know, I couldn’t do it. I couldn’t reduce it to the freshman level. That means we really don’t understand it.”

And to be honest kids, if we adults cannot explain something important about God simple enough that a child can understand…

Well, maybe not a toddler. 🙂

If we adults cannot explain something important about God simple enough for you to understand, then…

Maybe we really don’t understand it.

Big or fancy words can make us sound smart, but they don’t actually prove we are smart.

Is “indubitably” a simple word?

So, if I use some highfalutin word you don’t understand, go ahead and raise your hand and ask me what it means.

By the way, “indubitably” means it is definitely true, that there is nothing to argue about, and highfalutin means it tries to look important. 🙂

Ultimately when you do a sermon about Jesus on the cross there really is just one question tyou need to answer. Do you know what it is?

I’m not saying there aren’t any other questions, but if you saw a good man being killed, don’t you want to know why?

Jesus was a good man.

Back to the Garden

You have to go back to fairly soon after the first man and woman were created by God. You’ve heard of Adam and Eve, right?

But before we go back there, let me ask you a question.

If I let go of this toy car off a very high cliff, what will happen? [It will fall and will probably break.]

That is because the Law of Gravity means it’ll pick up a bunch of speed and hit the ground fast and hard.

It is just the way it is. We have no problem understanding cause and effect in the physical world.

A natural cause and effect.

Cause: dropping the car off a cliff on a world with gravity.

What would happen if you drank poison? [You would get sick. You might die.]

A natural cause and effect.

The same is true with rules of right and wrong. You do wrong things and there is a bad natural effect.

Does that make sense?

Remembering that, let’s head back to the Garden of Eden where our original parents lived…to a time before they did something very, very wrong.

16 And the LORD God commanded the man, saying, “You may surely eat of every tree of the garden, 17 but of the tree of the knowledge of good and evil you shall not eat, for in the day that you eat of it you shall surely die” (Genesis 2:16-17).

God told them they could eat of every tree except one. Do you remember which one that was?

Right! The tree of the knowledge of good and evil.

What would happen if Adam and Eve ate of that tree?

Right! They would die.

Now, I know it would be easy to think that meant that the fruit from the tree of the knowledge of good and evil was poisonous…but that’s not it.

Basically, what our loving God was telling them was that sin kills. Another part of the Bible says “the wages of sin is death” (see Romans 6:23)…which means that…sin pays those who do it with death.

Natural cause and effect:

Before we continue, do you know what sin is?

Cause: doing something wrong.

Cause: doing something wrong.

Now, our loving God didn’t let them die as soon as they did that very bad, dumb, wrong thing, but at that point their death began.

And death became a reality for all of us. Unless Jesus comes back while we are alive, every last one of us sitting or standing here will die.

Cause: doing many things wrong.

Are you still following along?

“But Alan,” you could say, “why should we die because Adam and Eve did something wrong?”

Do you sin? Do you do wrong things?

Wait…before you answer…let’s look in the Bible together at two verses.

for all have sinned and fall short of the glory of God, (Romans 3:23)

The second verse is a bit more difficult to understand, but says if you claim to not do wrong things, you are fooling yourself and you are lying.

Do you sin? Do you do wrong things?

What Really Is the Problem?

Okay kids…together we have learned:

Cause: do wrong things.

And we have learned that we all do wrong things.

But, why does sin kill? Why does doing wrong things cause you to die?

2  but your iniquities have made a separation

between you and your God,

and your sins have hidden his face from you

Iniquities. Another word that isn’t very simple. Do you know what it means?

Sin. Things you do wrong.

And, through Isaiah, God is saying our sins…the things we do wrong…separate us from God.

Don’t let anyone fool you. Just like you need air to live, you need God to live.

And if you want to keep doing wrong things…in the end God will give you what you want…freedom from Him…that separation will happen fully and…you know what?

You will die because you do wrong things, not because Adam and Eve did.

Do you want to die?

So, we all agree we have a problem, right?

Cause: we do wrong things that separate us from a God we need to live.

How do we fix it?

Okay, this is where I am going to be honest. I can tell you what the solution to our problem is, but I cannot tell you exactly how it works.

But, you know what, I know a mechanic can fix my car even though I don’t understand how he or she did.

And God can fix me…He can fix you…even though we don’t completely understand how He does it.

Is that okay with you? Assuming so…

Romans 5:10 tells us how how God fixed our sin problem:

For if while we were enemies we were reconciled to God by the death of his Son, much more, now that we are reconciled, shall we be saved by his life.

That includes a lot of words that aren’t simple, but let’s focus on “we were reconciled to God by the death of his Son.”

Do you know what “reconciled” means?

It means “un-separated”…brought back together.

To un-separate us from God.

If separation from God causes death.

What does bringing us back together with God do?

That’s right! It gives us life!

To un-separate us from God.

So we can live!

I’ve got some good news and bad news.

You will die. Well, unless (as mentioned before) you believe in Jesus and He returns while you are alive. Otherwise…

God’s fix has to do with whether you will live or die forever after you leave this world. After you die on earth.

The good news is that Jesus took care of that. You can live forever with God if you allow Jesus to “un-separate” you from God.

If you allow Him to fix you like a mechanic fixes a car.

Because your sin separates you from God.

Because to fix your sin problem, Jesus had to die on the cross.

Because to un-separate you from God, He had to die on the cross.

There is another really complicated verse, 2 Corinthians 5:21, which says:

For our sake he made him to be sin who knew no sin, so that in him we might become the righteousness of God.

The simple version of that is:

Jesus never did anything wrong. Not even once.

God treated Jesus like us…like people who do things wrong…so we could be with God. To un-separate us from God.

So you won’t have to die forever.

So we can live!

He died for you.

He died for me.

He died for us.

So, how did I do kids? Do you understand why Jesus had to die on the cross?

Putting it all together. Jesus had to die on the cross because if He didn’t the wrong things you do would separate you from God forever and you would die forever. Jesus died so you can live. Forever.

Jesus died on the cross because He loves you…because God loves you.

Let’s all say this together…