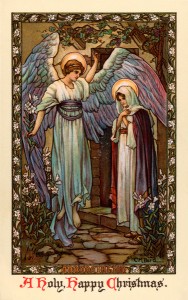 The “In One Year” Bible reading for today was Luke 1…I didn’t realize it was such a long chapter. 🙂

And in that lengthy chapter two miraculous conceptions were announced. The first was to John the Baptist’s dad-to-be Zechariah:

But the angel said to him, “Do not be afraid, Zechariah, for your prayer has been heard, and your wife Elizabeth will bear you a son, and you shall call his name John (Luke 1:13, English Standard Version).

The second was even more incredible, since the mother-to-be was a virgin:

And the angel said to her, “Do not be afraid, Mary, for you have found favor with God. And behold, you will conceive in your womb and bear a son, and you shall call his name Jesus” (Luke 1:30-31).

Now, with both I’ve kept the excerpts short, so you should open up your Bible to get a more complete flavor of the interactions with the angel Gabriel. It’s worth it. 🙂

Who knows how we would react to such an event. Thanks to inspiration, however, we do know how those two first century individuals did. First, the future dad:

And Zechariah said to the angel, “How shall I know this? For I am an old man, and my wife is advanced in years.”And the angel answered him, “I am Gabriel. I stand in the presence of God, and I was sent to speak to you and to bring you this good news. And behold, you will be silent and unable to speak until the day that these things take place, because you did not believe my words, which will be fulfilled in their time” (Luke 1:18-20).

And the future mother:

And Mary said to the angel, “How will this be, since I am a virgin?”

And the angel answered her, “The Holy Spirit will come upon you, and the power of the Most High will overshadow you; therefore the child to be born will be called holy-the Son of God. And behold, your relative Elizabeth in her old age has also conceived a son, and this is the sixth month with her who was called barren. For nothing will be impossible with God.” And Mary said, “Behold, I am the servant of the Lord; let it be to me according to your word.” And the angel departed from her (Luke 1:34-38).

On the surface Gabriel seems to be playing favorites, doesn’t he? Zechariah and Mary both were noting the apparent impossibility, weren’t they? So, why did Gabriel read the former’s response as a lack of belief, but not the latter’s?

Well, beyond the fact (I suspect) God provided the archangel with that insight, someone given temple duty would have had to have been aware of the story of Abraham, Sarah, and Isaac wouldn’t he? (See Genesis 18:1-15; 21:1-7.) So what Gabriel announced to Zechariah wasn’t so far fetched, was it? It had been done before!

But a child with no father, now that was something new (even if it was foretold in Isaiah 7:14). Or, with proper emphasis…

That was something new!

Mary had every reason to wonder without it indicating any lack of faith…and you have to love how, after Gabriel explained the specifics, she humbly replied, “Behold, I am the servant of the Lord; let it be to me according to your word.”

Now that is faith. Two babies, two reactions. How would you respond if Gabriel came visiting you with that kind of incredible news?