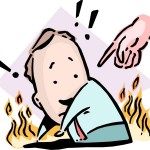 Instead of writing my own version of the articles, I’ll link to them and let you read both. Two things about the Duck Dynasty family patriarch, Phil Robertson:

#1 means he is going to believe (and repeat) what the Bible teaches.

#2 means he is going to share his views in an eccentric way.

Scripture says homosexuality is a sin, no ifs, ands, or buts about it. Doesn’t matter if a person is genetically predisposed to same sex attraction or not.

But, in modern American society, it is a sin to call this sin a sin. It is "anti-gay":

And the sin of calling this sin a sin requires an "indefinite" suspension.

Additionally, as another article notes:

To the Left, it doesn’t matter how Robertson actually treats real people. The thought that homosexual acts are wrong is enough to make him a bad person who should be fired. He’s literally guilty of a thought crime against humanity even if he is literally tolerant of gay people every day of his life. There is no room for tolerance of him.

Please take the time to follow the links. Would I have said what Robertson said the way he said it? No…I’m not as much of a character as he is, and I’m very sensitive to the "you are comparing homosexuality to <fill in your terrible thing here>." (In this case, Robertson made the mistake of mentioning bestiality…although he never said they were equivalent.)

If you are a Bible-believing Christian, don’t think you have to be as eccentric in your statements as Robertson to be persecuted. Sooner or later, if you remain true to your faith, you’ll get your chance.

P.S. Please pray for Phil Robertson and all those who will be led astray by the reaction to his words.
P.P.S. And, please, before you assume anything about me personally, read "What I Think About Homosexuals and Homosexuality."

UPDATE: Robertson is not backtracking (good for him). Shame on another media outlet, however, for mischaracterizing his original comments as “anti-gay” and “homophobic.”

One thought on ““To the Left, it doesn’t matter how Robertson actually treats real people.””