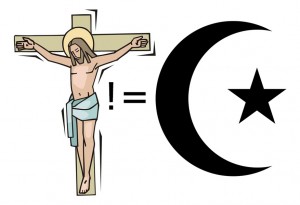 One of the web pages I check on pretty much daily is The Corner at National Review Online. A couple weeks back I ran into the article "You're a Good Man, Cardinal Dolan." Michael Potemra's piece starts off with:

The highly mediagenic archbishop of New York, Timothy Cardinal Dolan, visited a mosque on Staten Island and encouraged the worshipers there to hold on to their faith.

Regardless of whether Islam is a "religion of peace" or not, if you are a Christian who holds on to traditional faith, you probably reacted to that sentence the same way I did.

Although I am an inclusivist (see also here), I cannot reconcile Potemra's opening statement with John 14:6:

Jesus said to him, "I am the way, the truth, and the life. No one comes to the Father except through me" (John 14:6, English Standard Version, emphasis mine).

Now, before I judge someone's words I try to read (or hear) them in context, and I clicked through to the news report that was the genesis of Potemra's entry. I could not find the cardinal specificaly encouraging Muslims to hold on to their faith, but in some respects this was even more disturbing:

The cardinal asked questions about the Muslim faith and emphasized throughout his visit how much the two religions and their members have in common.

"You love God, we love God and he is the same God," the cardinal said of the Muslim and Roman Catholic faiths.

Now, it's not like I consider Catholicism a Christian church (although I do believe there are Catholics who are Christian in spite of that), but still…how can someone who has likely studied Scripture more than me suggest something like that?

And if you agree with Cardinal Dolan, just ask a devout Muslim if Jesus is the Son of God.

No, Allah is not Yahweh…and since Islam is a false religion, its god is the father of lies (see John 8:44). There is no gray area. You either worship the true Father or the false one.

Islam worships the false one.

P.S. The closest thing I could fine to what Potemra said was:

He likened Muslims to earlier waves of Roman Catholic immigrants who some 150 years ago faced the same challenge of "how to become loyal, responsible, patriotic Americans without losing their faith."

P.P.S. By the way, I would expect a true Islamic believer to tell me I worship a false God…and I would not take it badly. If anything, if they actually care about me I would expect nothing less of them.