Many of the folks I follow on Twitter are Calvinists. I personally believe in free will, but do grant that they have ample evidence for their predestination views. I just weigh the evidence in toto differently.

As someone who is thus the recipient of it, I have noticed a certain smugness in what quite a few Calvinists tweet, and after non-Calvinist Ed Young embarrassed us free will-ers with an anti-Calvinism diatribe sermon, the Twittersphere was all abuzz. His talk was amazingly shallow and inaccurate, but I did note that sometimes I have found Calvinists to be kind of snooty (as he mentioned in his sermon). Trying to put Calvinism’s most common smug comments into a single tweet, I wrote:

I’m sure when I actually study or give up my traditions or let God enlighten me or stop questioning His sovereignty I’ll be a Calvinist too.

When I woke up the next morning, one of my east coast Calvinistic friends ironically responded:

@AlanCult All Christians follow traditions. Some of us are just more aware and / or honest about the traditions we hold.

I actually had to ask him if he said that as a joke…or if he realized he just did exactly what I was being snarky about. (It appears to have been the latter.)

The funny thing about smug Christian quotes is that those who say them don’t appear to realize that others who disagree their viewpoints would say the exact same thing to them. For instance, another Calvinistic Twitter friend posted this before my humorous tweet above: 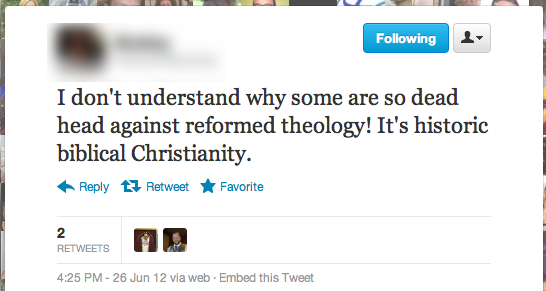 I don’t understand why some are so dead head against reformed theology! It’s historic biblical Christianity.

Now, let me ask you this…do you think that any denomination or other group of Christians with a given set of beliefs think that they don’t have "historic biblical Christianity?"

"Egad! I now see the light! Thanks for pointing out how blind I’ve been. If only I had realized my Christianity was the modern unbiblical stuff sooner!"

If you are a Christian, don’t you believe you have "historic biblical Christianity?" (If not, why do you claim to be a Christian?)

I have some suggested guidelines on what to think about before you make a statement about your beliefs or someone else’s (these may grow as this post ages):

Finally, I’m going to start listing the most common snooty Christian statements I see. It’s getting late and I’m tired, so this list will be a bit short to start, but I’ll add updates. When I can get snapshots of these smug animals in the wild, I’ll try to include them. If you have any suggestions for additions to this list or the one above, please put them in the comments or contact me.

A couple final notes. I purposely blurred out my friends’ Twitter handles because they are great brothers in Christ. Although I am a bit snarky in this post, I don’t mean it as an attack on anyone…and I know I am probably guilty of saying intrinsically snooty Christian things too. The difference is I am actually right.

Well, maybe not all the time… 🙂

P.S. Actually…you gotta admit even the name of the modern Calvinistic movement, "Reformed," is smug. (Translation: your belief system is unreformed.)