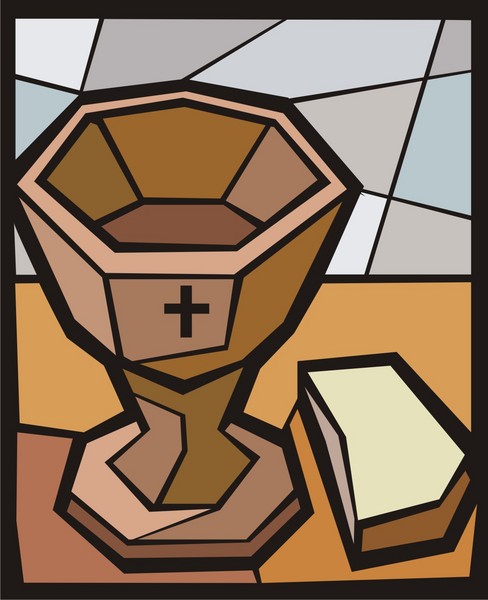 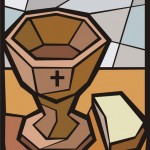 Now…if you are like me and get great comfort from routine…at this point you are a bit uncomfortable because I got Winslow to change up the order of the service…and I’m making you all wait for the Lord’s Supper until after the sermon. However, since my talk is about that very subject, it seemed apropos to hijack the Sunday schedule so that we partake of the body and blood of Christ after we spend twenty to thirty minutes discussing it.

And I promise–next week we go back to normal! 🙂

Along with changing the order of the service, I’m going to throw off the normal flow of my sermons and give you the punch line at the beginning of this talk Not only does it allow me to gain evil enjoyment out of further throwing off my fellow consistency-loving brothers and sisters :-), you can make sure I actually do what I promise.

After we get done with a quick discussion of a few views of Communion, we’ll let the Bible show us that the Lord’s Supper:

Of course there is more, but let’s leave it at that for today…

So…what exactly is the Lord’s Supper?

Obviously, you could say, “You dummy Alan, it’s what we do every week with the crackers and juice.”

But I would argue that is a cop-out 🙂

Instead…I think there is some benefit to looking to the short and larger Catechism of the Westminster Confession Standards. Starting with shorter’s response to the question, “What is the Lord’s Supper?”:

The Lord’s supper is a sacrament of the New Testament, wherein, by giving and receiving bread and wine according to the appointment of Jesus Christ, his death is shewed forth; and they that worthily communicate feed upon his body and blood, to their spiritual nourishment and growth in grace; have their union and communion with him confirmed; testify and renew their thankfulness, and engagement to God, and their mutual love and fellowship each with other, as members of the same mystical body.1

Wow! Didn’t seem so short and they stuck a lot into it, eh? I think if you mentally review the bullet list I just gave you…you’ll find they have a lot in common.

As does the larger’s version:

The Lord’s Supper is a Sacrament, Wherein, by Giving and Receiving Bread and Wine, According to Christ’s Appointment, His Death is Shewed Forth; And the Worthy Receivers are, Not After a Corporal and Carnal Manner, But by Faith, Made Partakers of His Body and Blood, with All His Benefits, to Their Spiritual Nourishment, and Growth in Grace.2

Did you notice something odd? The “larger” catechism had a shorter answer. Larger is because it has more questions and answers (196 versus 107), not because it’s more verbose. 🙂

The two are similar…but have enough differences to make them a valuable “summary” together.

Names for the Lord’s Supper

Now that we have a couple of rather verbose definitions…how about names for the Lord’s Supper?

I’ve already mentioned a two here–the most obvious one is the “Lord’s Supper.” What was the other one I said?

The Dictionary of Christianity in America can help us complete our list:

In the pluralistic environment of American denominationalism, it is understood as either a sacrament or an ordinance, and is called by a variety of terms including: Mass, Eucharist, Holy Communion, Lord’s Supper, Sacrament of the Altar.3

When it comes to Churches of Christ, my guess is you won’t be hearing “Mass” or “Sacrament of the Alter” a whole bunch…but I do like the idea of adding the term “Eucharist” to our glossary–since it derives from the Greek word for giving thanks that’s found in Matthew, Mark, and Paul’s narratives of the Last Supper (Matthew 26:27; Mark 14:23; 1 Corinthians 11:24). I think the derivation of the term “Lord’s Supper” is a bit obvious…but if you were wondering about “Communion”…that comes from the word “participation” in 1 Corinthians 10:16, which “is traditionally translated ‘communion.’”4

Ahhh…before I forget…there is one more common way in the New Testament to refer to the Lord’s Supper, although none of the scriptures we’ll look at today will include it. Do you know what it is?

One final quick discussion before we dive into the Bible. We used the Westminster Catechism to define the Lord’s Supper…but within Christianity (or churches that claim to be Christian) there is quite a bit of difference in views of what is set before us.

As members of the Church of Christ, we believe that the bread and wine are symbolic–beyond what we are commemorating, there is nothing intrinsically special about them at any point before, during, or after the ceremony.

There are at least a few other views:

Transubstantiation — is the Roman Catholic view that the Priest’s blessing literally turns the sacraments into the body and blood of Christ. Literally. I’ll admit there is something disturbing about that concept to me.

In the worship service (but not at any one precise moment), when the Word of God is proclaimed and the Lord’s Supper is received, the glorified Christ actually gives spiritual nourishment from His own glorified body to those who receive it. As bread nourishes the physical body, so Christ’s glorified body enlivens the soul. Because of the organic union between Christ, the risen Head, and the members of His body, the church (Eph. 1:18-23; 4:15-16; 5:23), this nourishment is conveyed to Christians by the Spirit who dwells in them (Rom. 8:9-11). Calvin admits that the way the Spirit does this is a genuine mystery. Yet, it is not contrary to reason–simply above reason.6

Basically I see the dynamic view as just another step removed from transubstantiation…bodies of believers who unknowingly are just not giving up on Catholic tradition…and needing to keep something “magical” in the bread and wine (or ceremony). In my opinion it is very difficult to make a biblical argument for anything but the symbolic view.

And…as usual…our main concern is the biblical view. Time constraints will mean we won’t wade into the transubstantiation, consubstantiation, etcetera argument…but we’ll at least see if we can check off what I’d said we’d learn at the beginning of the sermon.

Although it may seem odd, let’s start with Paul. Based on when scholars believe New Testament books were penned, his narrative was the first written version:

23 For I received from the Lord what I also delivered to you, that the Lord Jesus on the night when he was betrayed took bread, 24 and when he had given thanks, he broke it, and said, “This is my body which is for you. Do this in remembrance of me.” 25 In the same way also he took the cup, after supper, saying, “This cup is the new covenant in my blood. Do this, as often as you drink it, in remembrance of me.” 26 For as often as you eat this bread and drink the cup, you proclaim the Lord’s death until he comes.

Let’s see how many of my bullet points we can check off with that one. The Lord’s Supper:

With that one section we checked off over half our bullets…and Paul will help us get even closer to our goal with another Scripture in 1 Corinthians:

14 Therefore, my beloved, flee from idolatry. 15 I speak as to sensible people; judge for yourselves what I say. 16 The cup of blessing that we bless, is it not a participation in the blood of Christ? The bread that we break, is it not a participation in the body of Christ? 17 Because there is one bread, we who are many are one body, for we all partake of the one bread. 18 Consider the people of Israel: are not those who eat the sacrifices participants in the altar? 19 What do I imply then? That food offered to idols is anything, or that an idol is anything? 20 No, I imply that what pagans sacrifice they offer to demons and not to God. I do not want you to be participants with demons. 21 You cannot drink the cup of the Lord and the cup of demons. You cannot partake of the table of the Lord and the table of demons. 22 Shall we provoke the Lord to jealousy? Are we stronger than he? (1 Corinthians 10:14-22)

From those words we get that the Lord’s Supper:

Although this selection is a bit of a harsh lecture from Paul…I like it a lot. It reminds us that in choosing the Lord’s table we have implicitly rejected every other table that conflicts with it. I won’t spend more time on that idea now…but think about it.

Additionally, I really appreciate that it reminds us that we are “one body.” When we share communion we are acknowledging that we are adopted brothers and sisters in Christ.

We are one short of our ten bullets…has anyone kept notes well enough to say which one?

“Represents Jesus’ sacrifice” is left. Even though it may seem too obvious to have to “prove,” let’s look to Luke to help us with that:

14 And when the hour came, he reclined at table, and the apostles with him. 15 And he said to them, “I have earnestly desired to eat this Passover with you before I suffer. 16 For I tell you I will not eat it until it is fulfilled in the kingdom of God.” 17 And he took a cup, and when he had given thanks he said, “Take this, and divide it among yourselves. 18 For I tell you that from now on I will not drink of the fruit of the vine until the kingdom of God comes.” 19 And he took bread, and when he had given thanks, he broke it and gave it to them, saying, “This is my body, which is given for you. Do this in remembrance of me.” 20 And likewise the cup after they had eaten, saying, “This cup that is poured out for you is the new covenant in my blood” (Luke 22:14-20).

Although not germane to this discussion…I still can’t help but think how great it is…that just before He knew He was going to suffer the most horrific death…Jesus earnestly desired to eat passover with His disciples. So much love…so much concern…so much selflessness…

But, let’s go for our final bullet…where does the Bible say that the Lord’s Supper represents Jesus’ sacrifice?

“This is my body, which is given for you” and “this cup that is poured out for you.” Both directly imply a sacrifice that is given or poured out for us. (And…if you think back to the first reference we had from Paul, both of these where already in there…just not as obvious.)

At this point in a sermon everyone listening has a right to say, “So, how does this apply to my life.”

If you aren’t a Christian…let it be a reminder of the great sacrifice God gave to have you enter His fold. Why are you waiting to make the commitment that allows you to become part of the “one body” by believing, repenting, and joining God’s church through baptism? Then you too can remember Jesus until His return!

Regardless…you will have to choose whose table you will sit at–with no decision being a decision against God.

Christian…I only touched the surface on what can be learned about the simple, yet profound, ceremony delivered by Jesus Himself to us. Don’t let that simplicity fool you–it is no less important than baptism, and should be shown as great a respect. You have chosen the right table…don’t ever ever pull up a chair to the wrong one.

Whose table are you going to spend eternity at?