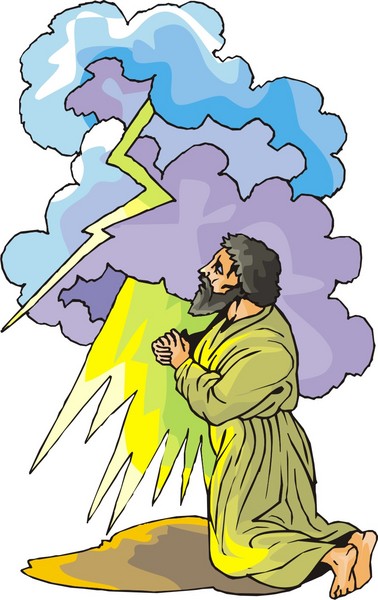 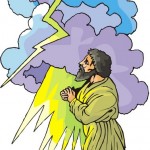 So…why is this sermon called, “Trudy’s Sermon About Wrath”?

Trudy is one of the most reliable attendees of our Bible studies…and often as we look at a book of the Bible or research a topic, we come across God’s wrath.  Now, I’m not going to suggest that Trudy is a wrathful person…but somehow she always seems to pick up on the subject. ☺

It seems, however, during those discussions we don’t have the proper time to spend on the “tangent” of wrath–and I promised Trudy that sooner-or-later we’d discuss it.

I try to be a man of my word, so this is my attempt to explain our Lord’s wrath…and I’ll admit upfront that just like any other time a finite man tries to explain an infinite God, I’m going to come up short–and not just because I had to cut out a lot to fit this within 30 minutes.

Hopefully, however, our understanding of this difficult topic will grow together.

One of the first things that became clear in my study of God’s wrath was that what I needed to review was more than just the word “wrath.”  For instance, looking at Nahum 1:2-3 alone:

2 The LORD is a jealous and avenging God;

and is fierce in wrath.

The LORD takes vengeance against His foes;

He is furious with His enemies.

3 The LORD is slow to anger but great in power;

His path is in the whirlwind and storm,

and clouds are the dust beneath His feet (HCSB).

What this sermon is really about is our Lord’s various forms of anger…from indignation to wrath.  How should we interpret those words when they refer to God?

We are not alone in wanting to understand this subject…

“What is righteous indignation?” one child asked another.

“I don’t know, but I think it means to get real mad and not cuss.”

Now…I suspect that is just a funny story (not a real conversation of two children)…but doesn’t it really explain some of our normal perceptions of God’s wrath?  He is really, really, really, really angry…but He does it without cussing?  That is…He gets angry just like we get angry, but when He does it he doesn’t do anything wrong?

When I started my research, I took my normal approach…looking up every occurrence of the word “wrath” in the Bible.  For instance, here is an early reference:

21 “You shall not wrong a sojourner or oppress him, for you were sojourners in the land of Egypt. 22 You shall not mistreat any widow or fatherless child. 23 If you do mistreat them, and they cry out to me, I will surely hear their cry, 24 and my wrath will burn, and I will kill you with the sword, and your wives shall become widows and your children fatherless (Exodus 22:21-24).

6 And Moses said to Aaron and to Eleazar and Ithamar his sons, “Do not let the hair of your heads hang loose, and do not tear your clothes, lest you die, and wrath come upon all the congregation; but let your brothers, the whole house of Israel, bewail the burning that the LORD has kindled (Leviticus 10:6).

46 And Moses said to Aaron, “Take your censer, and put fire on it from off the altar and lay incense on it and carry it quickly to the congregation and make atonement for them, for wrath has gone out from the LORD; the plague has begun (Numbers 16:46)

What may not seem obvious from those quotes…but started jelling in head as I read them and others…was that “wrath” really was just a way of describing “bad happenings,” whether God directly caused them or allowed them to befall people.  That is, God had Moses use expressions that humans could understand, but…like a parable…and they really were communicating a single important thing…outside the grace of God bad things will happen.  In the quid pro quo world of the old covenant with the Israelites this was an important thing for them to understand–so God used very emphatic word pictures to get his point across.

Any attempt to outline how divine wrath is depicted in the OT must first concede the overall anthropopathic character of Hebrew descriptions of Yahweh, a fact reinforced by the terminology above. But even though analogies are drawn from human anger, the wrath of Yahweh is portrayed somewhat differently from human anger in the Hebrew Bible. In some respects this is essentially the difference between “passion” and “pathos” (see Heschel 1962, vol. 2, esp. chap. 1).

“Passion” can be understood as an emotional convulsion which makes it impossible to exercise free consideration of principles and the determination of conduct in accordance with them. Although the OT discusses human anger much less frequently than divine wrath, it tends to portray human anger as such as a loss of self-control and then censures it, particularly in the wisdom writings (Prov 14:29; 16:32; 19:19; 29:22; 30:33; Eccl 7:9; cf. Sir 1:22–24; 28:3), thereby echoing Egyptian wisdom teachings (cf. also Gen 49:7; Amos 1:11).

“Pathos,” on the other hand, is an act formed with care and intention, the result of determination and decision. It is not a “fever of the mind” that disregards standards of justice and culminates in irrational and irresponsible action; it is intricately linked to “ethos” and approximates what we mean by “righteous indignation” (Heschel 1962, 2: 5, 63). The wrath of God tends to be portrayed in this way in the OT, especially in the prophets; it seems not to be an essential attribute or fundamental characteristic of Yahweh’s persona but an expression of his will; it is a reaction to human history, an attitude called forth by human (mis)conduct.

I know…a rather long quote…but it said it far better than I could have.  Although the Bible may use human emotions as metaphors for God’s anger, a full biblical picture of the latter shows a marked difference.  We generally are “losing control” when we get angry–God’s is Him deliberately doing what a situation requires.

God is not “having a fever of the mind”…and we are blaspheming our Lord when we portray Him as doing so with our theology.

It’s pretty clear that, through history, we’ve been able to see just how negative human anger is by looking at some of the advice our predecessors have left us:

Those are great wisdom from our historical parents, but the Bible also isn’t quiet when it comes to advice about anger:

but the wise quietly holds it back (Proverbs 29:11, NRSV)

A soft answer turns away wrath,

but a harsh word stirs up anger (Proverbs 15:1)

Refrain from anger, and forsake wrath!

Be angry and do not sin; do not let the sun go down on your anger, and give no opportunity to the devil (Ephesians 4:26-27)

And I could go on…both man and God have clearly communicated that anger is “only one letter removed from Danger.”  It is giving an “opportunity to the devil.”

Why are we discussing human anger?!

But Alan, this is supposed to be a sermon about God’s wrath–so why are we discussing human anger?!

Because I would argue that God is not a hypocrite–so whatever He tells us not to do, He does not do.

Again…what God tells us not to do, He does not do.

And I would also argue that in the way we have historically portrayed God’s wrath we are implicitly damning Him with his own words.  We have him in his holy chambers spitting mad–with only the blood of Jesus keeping Him from torturing His faithful for all eternity.  We have allowed biblical word pictures to become more than word pictures–instead an awful characiture of a being that nobody, in their right mind, would (or should) want to worship.

The Ultimate Definition of God’s Wrath

A couple more verses before we wrap up this talk…

Long ago, at many times and in many ways, God spoke to our fathers by the prophets, but in these last days he has spoken to us by his Son, whom he appointed the heir of all things, through whom also he created the world. He is the radiance of the glory of God and the exact imprint of his nature, and he upholds the universe by the word of his power. After making purification for sins, he sat down at the right hand of the Majesty on high, having become as much superior to angels as the name he has inherited is more excellent than theirs (Hebrews 1:1-4).

I would suggest that the ultimate definition of God’s wrath is Jesus.  That may seem odd on the surface…but don’t you agree:

Then how can we picture the Father’s wrath differently than Jesus’?  Yes, Jesus did zealously turn over the moneychangers’ tables (John 2:13-17) and He did have some harsh words for the religious leaders of His time (see John 8, Mark 7, and especially Matthew 23)…but can you really think of a single instance where Jesus’ wrath was like our wrath…or the wrath so often attributed to God?

No…the Jesus that sadly lamented, “O Jerusalem, Jerusalem, the city that kills the prophets and stones those who are sent to it! How often would I have gathered your children together as a hen gathers her brood under her wings, and you would not” (Luke 13:34) is no different than the God who tearfully exclaimed, “How can I give you up, O Ephraim? How can I hand you over, O Israel?  How can I make you like Admah?  How can I treat you like Zeboiim?  My heart recoils within me; my compassion grows warm and tender” (Hosea 11:8).

No…neither the Son nor the Father wants to give any of us up…and we can see from the first chapter of Romans that ultimately the “wrath of God” is giving us up to what we want…those who want Christ, to eternal life…those who don’t…to eternal darkness (because there is no light apart from Christ).

Finally…not only is Jesus the perfect example of God’s wrath in His life…but also His death.  We Christians believe that Jesus “bore” God’s wrath for us on the cross, don’t we?

How exactly did God “pour” His wrath out on the Son?  Did He torture Him?  Did He ridicule Him?  Other nefarious acts?

No, we humans tortured Him and ridiculed Him.

The Father just gave the Son what all unrepentant sinners are loudly requesting…separation from Him.  When that was done…Jesus died…

Just like we mustn’t define God’s wrath differently than we define Jesus’, we cannot portray God’s end-time wrath on the wicked any differently then what Scripture clearly records of Jesus’ demise here on earth.  Otherwise, how can we claim Christ was “was wounded for our transgressions; he was crushed for our iniquities; upon him was the chastisement that brought us peace, and with his stripes we are healed” (Isaiah 53:5)?

Now…having said all this…I hope nobody is now underestimating the severity of bearing God’s wrath.  Jesus Himself used frightful metaphors to communicate the magnitude of being lost–the standard understanding of Hell comes almost entirely from His words.

So, although I don’t want anyone to think that God’s wrath is like human wrath…it could not be more important that everyone do what Nick is doing today:

“And Peter said to them, ‘Repent and be baptized every one of you in the name of Jesus Christ for the forgiveness of your sins, and you will receive the gift of the Holy Spirit’” (Acts 2:38)