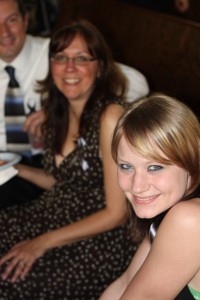 Although I knew Bekah had touched so many people the Great Brook gym would be full, I am still awed by the love that is so obvious in such a large crowd–as I am sure her family is too.

I am also glad to see that so many of you are starting to develop Bekah’s fashion sense–although I fear that most of you are doomed, like me, to never be able to quite pull it off like she did.

At least we can remember her by making a genuine attempt to “dress like Bekah”…and by appreciating the few who actually succeed. ☺

After I had chosen the topic for my talk, Bekah’s mother, Linda, asked me to share one thing with all of you. I am going to do so in a bit of a round-about way.

In times like these there are many natural reactions–shock, depression, anger, heartbreak–the list could go on–and none are right or wrong; they just “are.” We all grieve in our own ways, often by going from one extreme emotion to another.

[ These are quick sermon notes…not cleaned-up…and missing the “extras” that come out in the audio. All quotes are from the English Standard Version unless otherwise noted. ]

Earlier Larry read Psalm 121–a beautiful hymn of faith and dependence on our Lord–from where our help comes.

The Psalms are a unique collection of poems and songs. They too share a wide array of emotions–fear, depression, joy, anger, praise–again, the list could go on.

As a set they teach us one thing–to be honest with our emotions, especially with God. They implicitly speak against internalizing them–against denying them.

Yet at the same time we can learn from the actions of the writer of a great many of them–the young man who first slew a giant and later became the most famous king of Israel–David. Many of you may not realize that after faithfully killing Goliath for the first king of Israel, Saul–Saul became jealous of David’s military successes and tried to kill him multiple times.

David had every reason to be angry with Saul, and as luck would have it…again multiple times…Saul was “delivered” into David’s hands…but David never took advantage of it and didn’t harm Saul in the least.

Although David wasn’t always successful at it, at least in those cases he properly channeled his emotions–and we are blessed by that which has been captured within the Psalms.

When we lose someone so close to us, so beautiful, so caring, so giving–and there is someone–anyone–we can blame–it is natural to be angry–to want vengeance. But there is a reason David is called a man after God’s heart” (Acts 13:22); we can learn to turn to the Lord instead of acting on our rage.

Finally we can learn from David in one of the most touching psalms he penned. After the prophet Nathan confronted him with a sin that would make many an inmate cringe–stealing another man’s wife and then having him killed to cover up his crime (Bathsheba was pregnant)–David immediately confessed and repented. He also wrote Psalm 51, which starts with:

according to your steadfast love;

according to your abundant mercy

blot out my transgressions.

2 Wash me thoroughly from my iniquity,

and cleanse me from my sin!

3 For I know my transgressions,

and my sin is ever before me.

4 Against you, you only, have I sinned

and done what is evil in your sight,

so that you may be justified in your words

I’m sure we all could quickly think of multiple people David sinned against, but, strange as it may seem, inspired by the Holy Spirit David said he only sinned against God.

Be honest with your emotions, but please learn from David…and from Bekah’s mom, Linda…who has already forgiven.

For that matter, what would Bekah do?

Although anger is a natural reaction to such tragic news, I suspect for most of us once the initial shock wore off we felt a tremendous sense of loss.

How could the grandchild, the friend, the sister, the classmate, the daughter, the fellow believer be gone?!

They must be wrong!

Then the tears. Lots and lots of tears. Tears that never seemed to stop.

Tears that flow again so easily at a memory.

At an empty seat in class.

At a team short a dancer.

At a “goodnight” short a hug.

At a room that no longer has the girl with an magnetic smile in it.

The grief we feel has been felt throughout the ages. Sometimes it is impossible to believe there is a God–how can an all powerful being allow so much pain?

Now…it would take too long for me to try to answer that those questions here today…and when the pain is greatest no explanation will satisfy, but I do want to read once more from Scripture–from a passage that I find comfort in and hope you will to:

28 When she had said this, she went and called her sister Mary, saying in private, “The Teacher is here and is calling for you.” 29 And when she heard it, she rose quickly and went to him. 30 Now Jesus had not yet come into the village, but was still in the place where Martha had met him. 31 When the Jews who were with her in the house, consoling her, saw Mary rise quickly and go out, they followed her, supposing that she was going to the tomb to weep there. 32 Now when Mary came to where Jesus was and saw him, she fell at his feet, saying to him, “Lord, if you had been here, my brother would not have died.” 33 When Jesus saw her weeping, and the Jews who had come with her also weeping, he was deeply moved in his spirit and greatly troubled. 34 And he said, “Where have you laid him?” They said to him, “Lord, come and see.” 35 Jesus wept. 36 So the Jews said, “See how he loved him!” (John 11:28-36)

Mary and Martha had lost someone they loved more than the world. It had been days since Lazurus died–and the tears were still flowing…still burning…

And even though Jesus knew what He was about to do–knew that those tears would soon change to shouts of joy because Lazarus would walk out of the tomb.

Even though he knew he would raise his friend from the dead he was “deeply moved in his spirit” and…He wept. He cried with Mary…with Martha…with the other Jews with them.

Not because Lazarus died.

But because He cared.

And as Bekah’s loss continues to make you cry…He also cries with you…because He cares for you.

The same God who was with Bekah here on earth…welcomed Bekah to eternity…cries with you.

But just as with Lazurus…He does not cry because Bekah died.

Bekah was a believer…enough of one where the last Sunday she was here on earth she led a friend to Christ and was overjoyed at his baptism later that day at Gregg Lake. Most of you are probably familiar with the picture with the infectious smile that is on the poster for this memorial service–that was taken at the lake by a member of the church she attended faithfully.

She wanted her friends to know the Jesus she had accepted on July 6, 2008–when at the same Gregg Lake her father brought her into Christ’s family.

And I feel comfortable telling you that Bekah does not want you to cry. Bekah died with a promise–one you heard earlier. Death has not hold over her–has no sting (1 Corinthians 15:55). She is with her father, and, like Lazarus, will be raised again…with ”a cry of command, with the voice of an archangel, and with the sound of the trumpet of God” (1 Thessalonians 4:16).

No…you should not cry at Bekah’s fate–she has been promised an eternity…an eternity that is available to everyone who turns from their sins and to the same God she did.

Additionally, can you do anything but smile when you think of her? Didn’t you laugh at many of the stories you heard here today? Don’t you have many of your own “stories of Bekah” to share?

I know I do–whether it be how, after I baptized her friend, Bekah decided I wasn’t wet enough (her brothers agreed with her)…or finding out earlier this week from another one of her friends how he randomly skipped 16 minutes into one of my sermons only to hear…can you guess it?…Bekah giving me a hard time.

Makes me smile…and to want to twap her! ☺

I know that much of my talk has been a “downer”…but I also knew that this service would have plenty to smile about…and that by just reminding you to remember your own “stories of Bekah” it would bring the smiles she wants you to have to your faces.

So, as we wrap-up this service with a song and a prayer–do it with a smile–remembering Bekah’s smile.