If there is one thing I should hate my wife for, it’s training my youngest to like food channels. For instance, when you are in a hotel (like we are right now), who would put on the Food Network (or whatever other horrible one this one is)?! 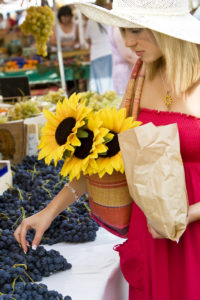 Either way, there is a program on that had a section where they go over things people do and rate them as not really bad, pretty bad, or very bad (or something like that). The first case they came up with was eating grapes while shopping.

Of the four hosts/guests, three seemed to immediately go with “not really bad.” One even admitted to doing it recently, eating 10 grapes while strolling around the grocery store.

I am a Christian. They may be. How do you think I rate it?

Well, the final host spoke up and said she rated it “pretty bad.”

Except she went on to say it was “pretty bad” because of all the pesticides/etc. use on them.

Egad folks! IT IS VERY BAD BECAUSE IT IS STEALING!

Now, you may happen to shop at a store where they have pre-weighed bags that you’ll pay the same for even if you munch away half of the grapes. Until you actually pay for them, it’s still stealing.