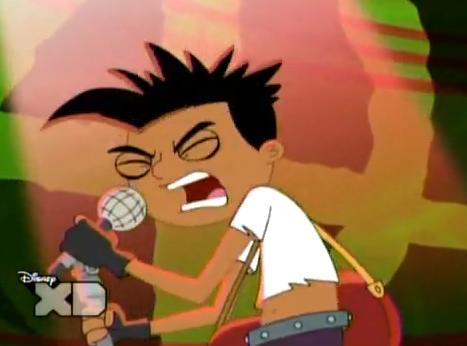 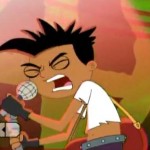 Mount Cardigan in Orange, New Hampshire isn't terribly tall, peaking at 3,121 feet. Additionally, the main trail is a short hike of 1.3 miles. However, a good portion of it has a sharp inclination, especially as the trees thin and the granite becomes prolific. It was perhaps three quarters of the way up the mountain last Saturday that I realized something…but hold that thought.

Let's first let's talk a little about Baljeet's experience at rock (as in music) camp. Reacting to a Banshee-type screech they (and others) heard, Phineas and Ferb searched out the source and discovered it was their Indian friend Baljeet doing a "fail wail" because he feared he would flunk "Summer Rocks" (which he mistakenly signed-up for thinking it was a geography class).

Phineas and Ferb were unsuccessful in their quest to help Baljeet channel emotions into his music, and just before the Baljeatles were to play, the frustrated musician was convinced his grade was doomed. His teacher told him there are no grades, to which Baljeet responded, "”No grades? Oh, so it is pass/fail?”" "No," the instructor replied, "We use a free-floating curriculum to encourage kids to just rock out and have fun."

"I do not believe this! I wasted all this time in a class without grades?! Ohhhhh!!!"

Well, the frustration of working so hard and there being no grade was just what our little Indian needed to generate an intense emotion that he could translate into a song, and he and the rest of the Baljeatles played his powerful track, "Give Me a Grade."

Although quite a bit taller and somewhat of a more bleached complexion, I am Baljeet. Not from a musical standpoint (I never have seriously tried), but I would have gone nuts having any grade-less class, and hated even the idea of pass/fail. Just like an accomplished athlete must appreciate that there are bronze, silver, and gold medals (or other trophies), I wanted an A, or a 100, or any other academic measure to strive for.

Even as an uncoordinated athlete (thanks both to nature and nurture), it seems crazy to me to have a Special Olympics approach where everyone gets a medal for participating (outside of a Special Olympics context). In my mind, healthy competition leads to excellence—ask my son about one bike ride we had with the Boy Scouts from Antrim to Hillsborough—even as an old guy I gave them a run for their money. 🙂

Which leads me back to the huffing and puffing 46 year-old somewhat-overweight guy who was stopping frequently during the last portion of his Mount Cardigan climb so that he could catch his breath and allow his heart to slow it's beating down below the megahertz range. It was during that phase that I realized that, at least physically, I had entered the portion of my life where I had to be satisfied with pass/fail. My success that sunny afternoon wouldn't be based on reaching the summit faster than other people, it would be just that I reached it. This epiphany of sorts shouldn't have surprised me—last December I had to be satisfied with just completing my first 5K race since, at 44 minutes, even some walkers had beaten me (but luckily I did save face a little bit by coming in one minute less than my 8 year-old nephew did a couple weeks earlier).

Yes, there are men and women my age (and older) who change their lifestyles and suddenly do something loony like becoming an Ironman (think running, biking, and swimming insane distances followed by a "you're in the club" tattoo). But even ignoring some physical limitations brought on by a lifetime of flat feet, it is unlikely that I would give up the time with family (both biological and church) to suddenly do what I need to become buff.

I suspect that's okay. No matter how loathsome pass/fail is to me, it's alright that I'm not suddenly going to win a marathon in my middle-age or senior years.

And, I've got some other good news. Grades are important, and physical prowess and stamina resulting in gold medals are commendable. Nevertheless, they are meaningless when it comes to what is most important—the eternal—and when it comes to that you don't have to worry about whether you will be valedictorian or if you'll cross the finish line first.

Salvation is pass/fail with one very simple condition for passing: trusting in our Lord Jesus Christ. Yes, there are some biblical indications of levels of reward in heaven, but even if that is true, we need to fully reflect on this exchange between Jesus and His disciples:

And they came to Capernaum. And when he was in the house he asked them, "What were you discussing on the way?" But they kept silent, for on the way they had argued with one another about who was the greatest. And he sat down and called the twelve. And he said to them, "If anyone would be first, he must be last of all and servant of all" (Mark 9:33-35, English Standard Version).

Anyone who attempts to jockey for position in the Kingdom of God will accomplish the reverse. The more content we are with the soteriological pass/fail, the more likely we'll hear Jesus speak the words, "Well done, good and faithful servant. You have been faithful over a little; I will set you over much. Enter into the joy of your master" (see Matthew 25:21, 23).

I did make it to the top of Mount Cardigan. Thanks to Jesus, I will make it into heaven. Praise God that salvation is only pass/fail, and that He wrote my "pass" into the Book of Life before the foundation of the world (see Revelation 13:8).